As I intend to indicate by the title of this post, most people around the country are not hosting or participating in layout operating sessions these days. Two-person crews would be an obvious problem, though of course crew size could be required to be single. Most layouts have areas that are unavoidably crowded during a session, so that social distancing would be impossible, and many would not wish to rely entirely on face masks as the backup.
Can we then not have operating sessions? This post describes a kind of alternative session, not the norm to be sure. Our granddaughter is visiting for a couple of weeks, she’s eight and a half, and she likes model trains. Note I didn’t say “loves” model trains, but does like them. She and I have built a couple of Accurail kits together, and she has operated these cars on my layout.
She is pretty capable with a DCC throttle, and does run at careful speeds, so I had the idea to set up some simple switching problems, using my normal operating session tools of waybills, agent messages, and industry location maps.
Slightly to my surprise, my wife Mary volunteered to participate in the session too. She has heard plenty about operating sessions but had never actually been in one. This one, of course, bid fair to be a pretty low-stress, low-expertise kind of session, and a good chance to learn peacefully. So we went with a two-person crew.
As with many switch crews that have operated here in the past, they began by finding all the cars they had to switch, and making sure they knew what to do with each car. When handed a blank switch list, the “light went on,” and they had the tool they needed. Here they are, finding the cars to be moved at East Shumala and completing their switch list (on the clipboard). 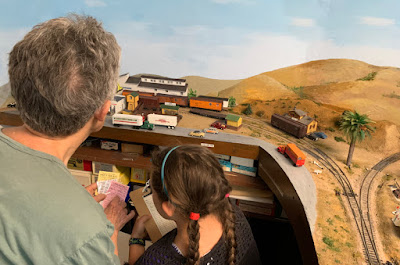 Next they set to work, doing each subset of the job in turn. Some of the individual moves were to pick up a loaded car and replace with an empty (or vice versa), others were to pick up or spot a cat separately from any other move. They were pretty organized and made very few false moves — though their rate of work was not too high. And I did offer a few hints. It was intriguing to watch when there were disagreements as to what to do next, since neither of them had really done this before. (The engineer is standing on a stool in this view.) 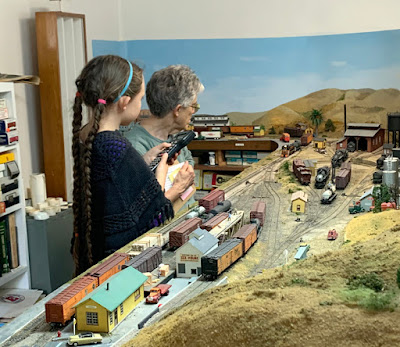 But they did all the moves needed, and got every car right where it was supposed to be. Good job all around! Next they wanted a little bigger session, so I arranged a bit more complicated job for them on the other side of the layout, at the town of Ballard. We did this the next day. Here they got to use a steam locomotive, SP Consolidation 2829, assigned to the Santa Rosalia local. It looks like Mary is throwing the lead switch near the tunnel. 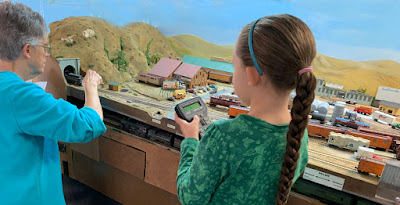 Again, the engineer, holding an NCE throttle, is standing on a stool to be this tall!
They continued with the work, and gradually got through all the waybills, and with the help of the agent’s message, picking up all the right cars, spotting everything where it should go, and making up the outbound train to return to Shumala. 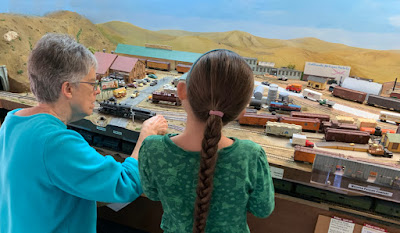 This was fun for all three of us. I enjoyed figuring out a compressed session and watching how they did the work, and I know they both were intrigued with the “board game” aspects of moving the various elements and ending up with them in the right places. They even examined some of the waybills to find out what the cargoes were in the cars! I especially enjoyed that part.
Tony Thompson
Posted by Tony Thompson at 10:53 AM