I posted recently about my latest column in the “Getting Real” series of columns in Model Railroad Hobbyist that was in the July 2020 issue (you can find that post here: https://modelingthesp.blogspot.com/2020/07/my-latest-mrh-column-crossbucks.html ). I have since received a couple of inquiries about the cover for the “Running Extra” section of the magazine, publicizing my column, which featured a photo from the column. Here is part of that cover: 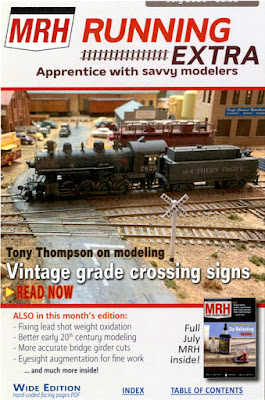 This image shows my modeling of the Nipomo Street crossing of the (mythical) Santa Rosalia Branch of the Southern Pacific, in the layout town of Ballard.
The photo was of course intended to show my new crossbuck installation (foreground), and I only included the locomotive to make the image more interesting. The locomotive is a model of SP Class C-9 Consolidation no. 2829. The  inquiries I received by email were about this locomotive and its unusual (for the SP) type of tender.
This type of rectangular tender was applied to SP locomotives in switching service for improved visibility to the rear. In my case, I obtained the tender with a Max Gray brass model of a 4-8-0, and used it to replace the Vanderbilt tender that the Key locomotive originally had. I chose to make this swap to reproduce the prototype SP locomotive no. 2829, assigned at San Luis Obispo for many years. The view below was taken at San Luis Obispo in 1954 by Alden Armstrong.

I’ve discussed this locomotive before, just one of the more than 400 Consolidations operated by SP  (see: https://modelingthesp.blogspot.com/2016/12/locomotives-for-layout.html ). Here’s a view of the right side of the engine, in an undated photo, location and photographer unknown, from the Stan Kistler collection. 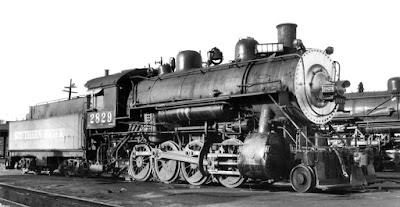 At this angle, the distinctive appearance of Harriman Consolidations is emphasized: the outwardly slanted cylinder chest, and the absence of visible valve gear (these engines had inside valve gear).
San Luis Obispo locomotive assignments like SP 2829 are essential information for my modeling, because the mythical branch line I model is located only 20 miles from San Luis, and power on the branch would certainly have been drawn from what was in San Luis Obispo roundhouse. The view below, taken by Mac Gaddis on November 16, 1953, show the right-hand side of the building, with seven Consolidations visible and one 2-10-2 at left. (You can click on the image to enlarge it if you wish.) 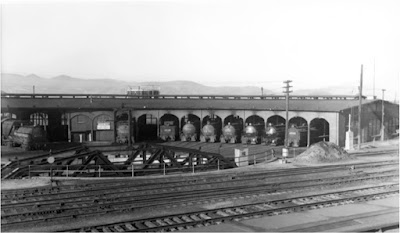 The Consolidation at far right, 2592, with its semi-cylindrical tender, is modeled on my layout; next to it are 2836 and 2752, also modeled in my fleet; and at the left of the row of Consolidations are 2829 and San Diego & Arizona Eastern 103, both of which I have modeled for (the latter engine, see: https://modelingthesp.blogspot.com/2020/03/sd-locomotives-on-sp.html ).
The type of rectangular tender behind SP 2829 was unusual behind SP Consolidations, the great majority of which usually had Vanderbilt tenders, but there were several others known to have had these tenders at one time, including numbers 2681, 2608, and 2705, and at least one of SP’s 0-8-0 switchers.
In the photo below, you see something I have mentioned before. Like several of my steam engines, no. 2829 had its mechanism tuned up and DCC decoder and sound installed by Al Massi. One of Al’s trademarks is that crew in the cab invariably have cigarettes in their mouths, as certainly was commonplace in that day. Though not always easy to see in HO scale, it’s usually discernible. 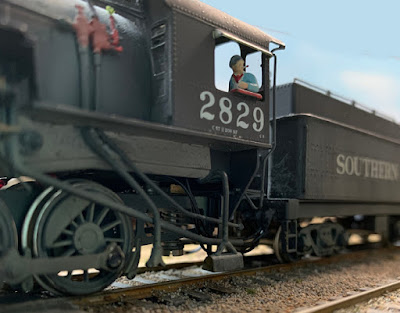 This locomotive happens to be a favorite model, not only from its prototype geographic assignment and distinctive appearance, but as a good runner. It is usually the power called for the Santa Rosalia Local, the main operating job on my layout in an operating session.
Tony Thompson
Posted by Tony Thompson at 11:35 AM