SD&AE locomotives on the SP

A detail familiar to many historians of the Southern Pacific Coast Division but perhaps not to many other SP enthusiasts, let alone to non-SP people, was the presence in late steam days of locomotives of the San Diego & Arizona Eastern (SD&AE) in various parts of the Coast.  I wanted to include one of these on my layout.
For a very brief background, the SD&AE was formed in 1932 by a purchase of the San Diego & Arizona, of which SP had only owned part until that time. Most SD&A locomotives had various second-hand histories, many from SP, with the exception of two large Consolidations, built new by Alco (Schenectady) in 1914 for the SD&A. They were numbered 101 and 102. In 1921, SD&A acquired from SP four more Consolidations, all used and of classic Harriman design, and built, like so many SP steam locomotives, by Baldwin. Their numbers were 103 to 106.
Of the latter, no. 103 had been built in 1907 as Class C-9 no. 2523, and was leased back to SP from the fall of 1948 until vacated in 1958. No. 104 was built in 1904 as Class C-8 no. 2720. It served on SP from 1948 until vacated in 1954, and survives today at the museum in Campo, California. Both nos. 105 and 106 were built in the SP General Shops at Los Angeles using reclaimed boilers, in 1917 and 1918, numbered 2843 and 2844, classified as Class C-10, and sold to SD&A in 1921.
So when a San Luis Obispo photo like the one below crops up, we know what we are looking at. The view is by Rod Crossley, taken in February 1954, with SD&AE 103 switching at left, F units on Train 919 to its right, and just arriving at far right, no. 99, the Daylight, about to cross Osos Street and stop at the depot.

Modeling no. 103 should not be difficult, as it is simply an SP Class C-9 Consolidation. Only the lettering might prove an issue, as there are no commercial SD&AE decals to my knowledge. Another problem might be matching the tender, a slightly unusual design of 9000-gallon tender with low side walkways.
The saving grace on the tender topic is that tenders were very frequently swapped among SP locomotives when they were shopped. As SP tender expert Arnold Menke described it, when an engine went into the shop, it rarely came out with the same tender, depending on which tender of the proper size the tank shop had ready when the locomotive’s shop work was completed. Sometimes the tender re-applied to a locomotive could be quite different than the one it came in with. For example, here are two photos of SD&AE 104, both by G.M. Best at Los Angeles (where these locomotives were shopped).  The first shows a rectangular tender..

The second photo shows a Vanderbilt tender with a higher walkway, similar to several HO scale tenders that have been available over the years, and unlike the tender visible in the photo at the top of this post.

This means that (within reason) a variety of tenders of about the same size might be found behind a particular engine at any one time.
I decided to use a Key Imports brass model of an SP Class C-9 Consolidation as the starting point. The aim was to model SD&AE 103, familiar at San Luis Obispo and thus appropriate for my layout, which depicts an SP branch not far from San Luis. Here is a photo, taken by Art Laidlaw, of SD&AE 103 in front of the San Luis depot:

The first step was to correct any mechanism problems (such as out-of-quarter drivers, as this model had), to make improvements such as replacing the original rubber coupling in the drive train with universals, and add a centering spring to the lead truck, and then to install a DCC decoder and sound, along with lights. That work was done by Mark Schutzer, who also painted the locomotive while it was disassembled. It was then my job to do the lettering and weathering.
As I said, I believe there are no commercial decals in HO scale for lettering SD&AE tenders, so I made artwork with the Charles Givens “font,” digitized from the original SP lettering drawings for numerals and characters (and available only for personal, not commercial, use). The decals were printed by Richard Brennan of TT West. I could then letter my model. Here’s a view to show the tender.

Next I needed to turn to weathering. Steam locomotives did vary widely in how weathered they looked, depending of course on how recently they had been shopped and painted, and especially toward the end of steam, dirt accumulation was ignored. I decided to apply moderate weathering, using my method of acrylic washes (for more information, see the archived pages at: https://modelingthesp.blogspot.com/p/a-few-years-ago-richard-hendrickson-and.html ). Here is the completed locomotive, switching at the town of Ballard on my layout. 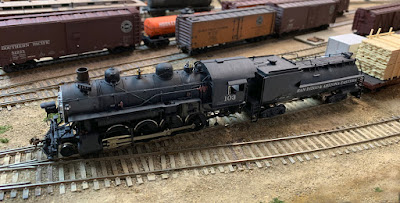 This has been a rewarding project for me, having wanted for some years to include one of the SD&AE locomotives so familiar at San Luis Obispo, in my operating fleet. And now I have no. 103 to play that role.
Tony Thompson
Posted by Tony Thompson at 8:46 AM