Locomotives for the layout

I have written several posts in the past about my choices for model locomotives to operate on my Southern Pacific branchline layout. One starting point for these choices has been the prototype SP locomotive assignment records (see my post at: http://modelingthesp.blogspot.com/2011/04/choosing-1953-locomotive-roster.html ). I followed up that post with one which showed more about those assignment records, and illustrated it with photos of one of my model locomotives, SP 2592,  which was chosen because of its assignment to San Luis Obispo (the post is at: http://modelingthesp.blogspot.com/2015/11/southern-pacific-locomotive-assignments.html ).
In the present post, I want to show more of my model locomotives.One of them, SP 2829, is distinctive because it received a rectangular tender at one of its shoppings, a tender type originally assigned to SP Twelve-wheelers. Locomotive 2829 was assigned at San Luis Obispo for many years, and I have shown a prototype photo of it in a previous post (see that one at: http://modelingthesp.blogspot.com/2015/09/drawing-lines.html ). One reason I liked this engine is exactly that distinctive tender, and I borrowed such a tender from a brass Max Gray 4-8-0 so I could reproduce the look of SP 2829. Here it is in action, backing across Nipomo Street in my layout town of Ballard, as part of a switching move. 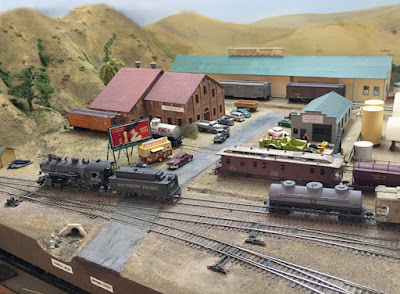 This locomotive, incidentally, often drew the yard job in San Luis Obispo, and as Mac Gaddis told me in an interview, the same “old head” crew ran the engine for years. The fireman on that job had one of those inimitable railroad nicknames; he was called “Numbnuts” (this interview can be found at: http://modelingthesp.blogspot.com/2011/01/modeling-freight-traffic-coast-line_19.html ).
Note that the previously mentioned model of SP 2592 also used a different tender than the one that came with that particular brass engine. Though a Key engine, the tender is a Westside product. The SP mixed and matched tenders, and modelers may have to do the same to produce a particular model locomotive.
Also among the familiar San Luis locomotives were two of the Mikados assigned there, Class Mk-6 engines 3251 and 3264. The Mk-6 class was built by Lima in 1914. I have a model of 3251, converted by Al Massi from a Hallmark T&NO Mk-5 by adding a sand box, replacing the feedwater heater and changing some other details, to make it a Pacific Lines engine. I also had to do a tender swap on this locomotive, as the Hallmark T&NO version had a doghouse on the tender. I applied a 10,000-gallon Vanderbilt from one of the Consolidations mentioned above, which had themselves received new tenders. Here’s an Alden Armstrong photo of 3251 switching near the depot at San Luis Obispo. 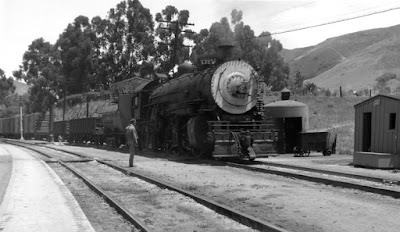 I use SP 3251 sometimes for the Surf Turn on my layout, though the turn was often handled by Consolidations. A common assignment of the San Luis Mikados was the King City turn, since they would have the power go up Cuesta, unless that train was light enough for a Consolidation to handle. But of course the Mikados were used elsewhere as needed. In this photo, 3251 is at Shumala on the Coast main line, just passing the depot as it arrives.

The foregoing might sound like you have to do a tender swap for every SP steam locomotive, but of course that’s not so. One of the Class C-9 Consolidations I have on the layout, SP 2752, is yet another long-time denizen of San Luis Obispo, and had an entirely conventional 10,000-gallon Vanderbilt tender, which came with this Key brass model in the first place. Shown below is 2752 at the engine terminal in Shumala, with the caboose track in the foreground. 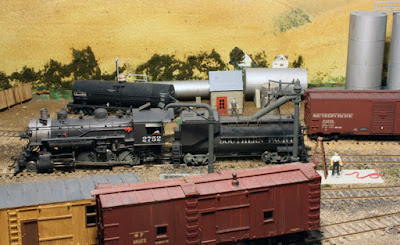 As with all my steam locomotives that have Vanderbilt tenders, I have relied on Al Massi to open up those tenders and install DCC and sound hardware. I owe him a real vote of gratitude for making these engines look and run as well as they do.
This is not my entire locomotive fleet, but gives some idea of my choices for steam power, based on San Luis Obispo assignments in the early 1950s. Obviously I am assuming that power that worked on my mythical branch line at Shumala, only about 20 miles south of San Luis, would be drawn from the power that was assigned at San Luis Obispo. I have enjoyed researching that power, finding prototype photos of the engines in question, and then acquiring models to duplicate them for my layout.
Tony Thompson
Posted by Tony Thompson at 5:54 PM