In Part 1 of this series about the Southern Pacific Instructions to Station Agents, which was Circular 39-1 of the Accounting Department, I showed the appearance of the book and wrote a little about some of the interesting contents (you can see it at: http://modelingthesp.blogspot.com/2016/11/sps-instructions-to-station-agents-part.html ).In particular, I explored the SP form numbers for various kinds of waybills, and showed the ways I have implemented that information on the model waybills for my layout.
The second section of this discussion, Part 2, was primarily concerned with information about weight agreements. For many shippers, those agreements simplified determining weights in freight cars, and I added some discussion about my knowledge of how weight agreements work and the various Weighing and Inspection Bureaus. Part 2 can be found at: http://modelingthesp.blogspot.com/2016/11/sps-instruction-to-station-agents-part-2.html .
In the present Part 3, I turn to some interesting information in Circular 39-1 about waybilling of tank cars. Most of what I want to discuss is in rule 1028, and I show below four parts of that rule. (You can click on the image to enlarge it.) 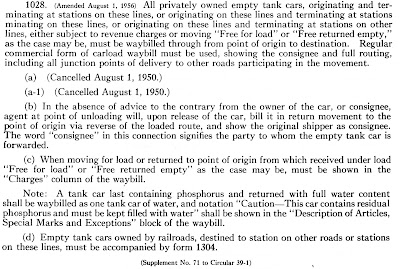 I will first discuss the main part of the rule, the first paragraph. This clearly provides that all privately-owned tank cars moving empty, whatever the.specifics of movement, cannot be moved on Empty Car Slips or equivalent, but must move on regular carload waybills. Among other things, this ensures that their entire empty movement is specified on one document, rather than the car moving through a number of junctions between railroads, all on the individual roads’ Empty Car Bills. This is something I have always done in my model waybills, as shown, for example, in Figure 15 of my column on waybills in the May 2012 issue of Model Railroad Hobbyist (you can download any issue of MRH at any time, for free, from their site at: www.mrhmag.com ). Here is another example. 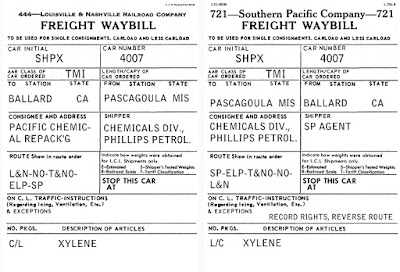 In this case, the waybill to move the empty car returns it over the same route, via the same junctions, as the car moved when loaded, as the first part of rule 1028, above, requires. These waybills also conform to part (b) of rule 1028, requiring reverse movement along original route, and with the original shipper shown as consignee on the return. Incidentally, here is the model of car SHPX 4007 that is moved with these waybills: 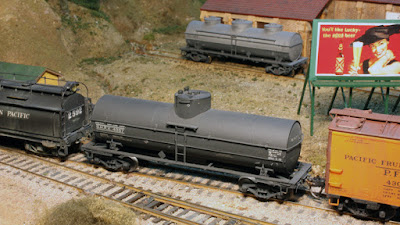 The model is an Overland brass car, ICC Class 104, seen in my layout town of Ballard behind SP Consolidation 2592. In the background is a three-compartment wine tank car.
Of course, tank car journeys can be much shorter, without traversing a series of junctions between railroads. The one shown below is at the other extreme of distance, though appropriate for my layout locale. 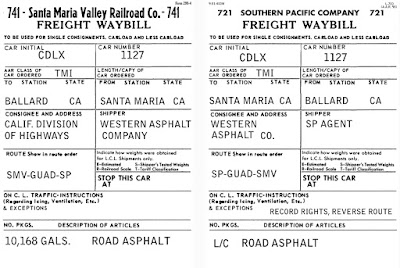 This pair of waybills is for the model of an asphalt tank car that I described in a previous post, part of my exercise in adding asphalt cars to my fleet (you can read it at: http://modelingthesp.blogspot.com/2016/10/asphalt-tank-cars-part-4-weathering.html ). Note also that the SP agent is shown as the shipper on the returning empty, as was typical practice.
Finally, there is part (d) of rule 1028, mentioning that for tank cars owned by railroads (as opposed to private owners), an Empty Car Bill may be used, and the specifically recommended form is SP Form 1304. That form is the basis for my own layout Empty Car Bill, and that form number is in the upper right corner. Here is a bill pair to illustrate. 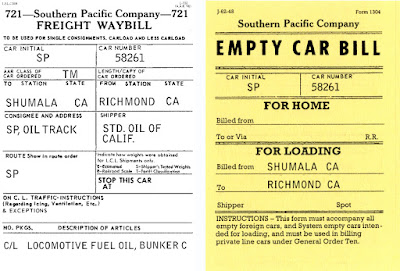 I am interested in tank car movements generally, and perusal of SP’s rule 1028 from Circular 39-1 has helped me ensure that my layout tank car handling is prototypical. But there are still a few more valuable details to be gleaned from Circular 29-1, which I will take up in a future post.
Tony Thompson
Posted by Tony Thompson at 12:01 PM