I have often heard modelers who try to research tank cars and tank car fleets complain about the Official Railway Equipment Register (ORER), that most tank car owners don't show the number of cars in a number group. For example, an entry might be for cars 500–599, but the actual number of cars isn’t shown. And the overall size of that car owner’s fleet make it unlikely there are 100 cars in that group. But there is no way to know the actual number of cars.
(For those not familiar with the Equipment Register or ORER, I wrote a four-part series of posts about it awhile back. In fact, those posts are actually parts of the essay I was asked to write as an introduction for the NMRA reprint of the January 1953 ORER issue. Here is a link to the fourth post in that series: http://modelingthesp.blogspot.com/2014/05/the-equipment-register-part-4.html .)
The complaint I mentioned above is entirely accurate, and there is a simple reason why those data were largely omitted from issues of the ORER. It’s because there was a separate tariff document, called Freight Tariff 300 and entitled Tank Car Capacities Tariff. The tariff was reissued from time to time, and each time, given the next highest letter of the alphabet as a suffix. I will discuss below, for example, Tariff 300-H, from 1955.
The first Tariff 300 seems to have been issued in the 1920s. Before that time, a similar document was in force, under several different names. For example, one series was called Circular 6, and it too had letters of the alphabet to indicate successive issues. Circular 6-O (that’s the letter “O,” not a zero) was issued in 1919, and has been digitized by Google. But for the most part, these tariffs are rare, found in very few archives.
For some purposes, these documents are remarkable. They show the exact gallonage of every single tank car in service at the time, and of course the car number. One can obviously nail down any fleet of tank cars with this document. But for my purposes as a 1953 modeler, the 300-H issue, effective September 13, 1955, is excellent. Luckily for me, it has been reprinted. Here is the cover: 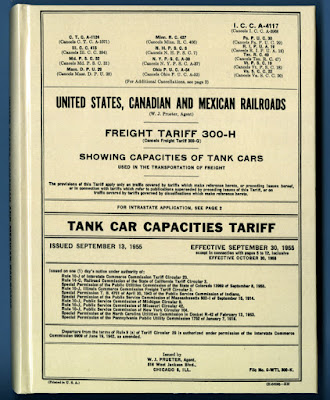 The cover is a reproduction of the original book. The tariffs of this kind were not meant as lasting documents, because they were regularly replaced, and were printed on low-quality newsprint. This reprint is on good quality white paper. As you can see below, it is a sizeable book, fully an inch and a half thick. 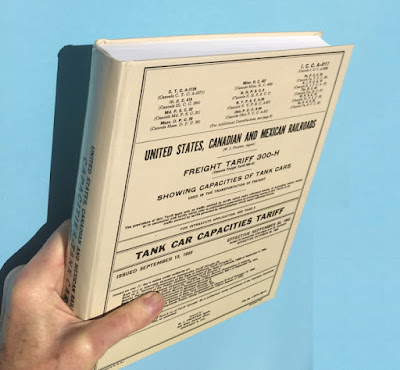 Where can you get this? Ian Cranstone has digitized two of these tariffs and has had them reproduced at Lulu.com as hardcover books. They cost about $42. The one shown above is the 1955; to buy it, go to:

I will show one example of how this tariff can be used. Below is an AC&F builder photo of a California Dispatch Line (CDLX) car with four compartments, assigned to wine service. It was provided by Ed Kaminski. 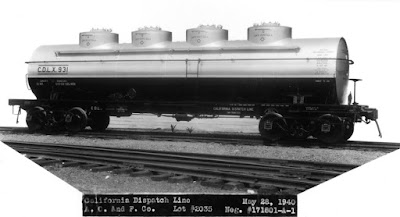 What can we find out about CDLX 931 from the ORER and from the tank car tariff? The ORER issue for January 1953 (the NMRA reprint mentioned above) only tells us that CDLX series 897–975 are AAR type TLI (lined and insulated) and with 40-ton trucks. A note to that entry adds that all cars in this series are “compartment cars,” meaning multiple compartments but not how many or how big. And as usual, the ORER does not tell how many cars were in this 897–975 number group (could be as many as 79 cars).
The tank car tariff 300-H is from the summer of 1955, by which time the CDLX fleet had been sold to General American, and was in the process of being repainted and given GATX reporting marks. But there were a number of cars marked CDLX still in service, and part of a tariff page (page 266) containing some of the CDLX cars is shown below. (You can click on the image to enlarge it.) 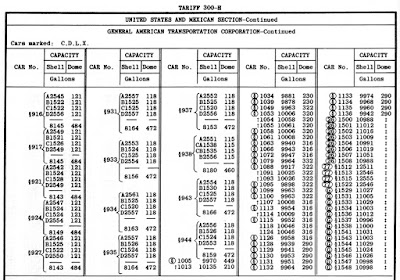 Here the four-compartment nature of CDLX 931 is clearly indicated, and the gallon capacity of each compartment identified. Note the other four-compartment cars shown also. The previous page in the tariff contained quite a few more four-compartment cars, along with a number of six-compartment cars. Moreover, the tariff shows that at that time, the CDLX 897–975 group contained 20 cars (and of course shows the individual car numbers).
(Incidentally, anyone wishing more background on tank cars might wish to look at my two articles in Model Railroad Hobbyist, which were in the issues for February and March, 2016. The first is about prototype cars, the second about modeling. These and any issues of MRH can be downloaded for free, at any time, from their website at: www.mrhmag.com .)
I find tank car models interesting and fun to operate, and naturally I have a fair number of them in my fleet to use on my layout. I often have occasion to refer to the tank car tariff for various kinds of information about the prototypes of my cars. I highly recommend it if you too find these kinds of information interesting. And a big thank-you to Ian Cranstone for making these available!
Tony Thompson
Posted by Tony Thompson at 3:35 PM