I haven’t written about the town at the end of my mythical Southern Pacific branch line, which is Santa Rosalia, for some time. In fact, the last post about it described building Willow Lake Road (that post can be found at this link: http://modelingthesp.blogspot.com/2016/04/building-willow-lake-road.html ). But things have been progressing there, as I describe in the present post.
That previous post showed the layout edge as raw plywood and Homasote. It did remain that way for some time, as complications in electrical power management delayed final arrangements. But finally I was ready to go ahead with some additional fascia to give the Santa Rosalia area a better look. As usual, I cut a piece of tempered Masonite and shellacked both sides before installing. Here is that piece, at the far end of the layout. The depot has been temporarily removed during work.

Note the bare spot at the left of the new fascia piece. The piece of L-girder sticking down below the layout edge is the support for a forthcoming control panel. The small black area on the fascia at right is a piece of Velcro.
The small control panel will be for electrical management of the three-way turnout which can just be seen, right above the panel location. That electrical challenge is interesting in itself, and I will return to it in a future post. But for now, I am just discussing the fascia.
I designed the control panel to fit in the empty space you see in the above photo. Without going into the electrical side of what is controlled, I will just describe the panel itself. I began with another piece of tempered Masonite, and painted most of it deep yellow. I then masked off what would be the track diagram on the final panel, using drafting tape. 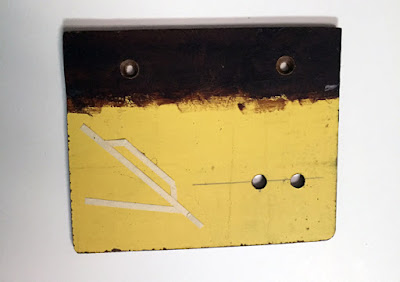 This photo also shows the holes drilled for eventual layout attachment, at top, and the two holes for the control switches. The next step was to paint the panel black, and remove the tape. Here is the result at that point: 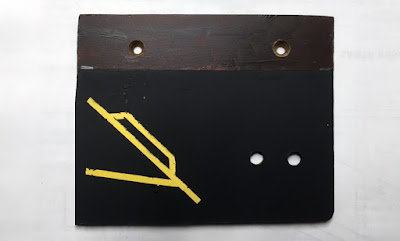 For lettering, I simply laid out some yellow lettering on a black background, printed it out on heavy paper, and glued the resulting legends in the appropriate places. (I will describe the panel operation, and thus the labeling of the switches, in another post.) The panel could then be installed in the gap in the fascia, shown at the top of this post. In the photo below, the depot has also been restored to its regular location. 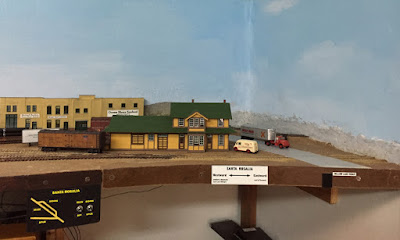 Note here that I have added also the town name at center, so that visiting operators know which direction is east or west. (You can click to enlarge.) I also added the name of Willow Lake Road right under the road end. Any geographic feature which intersects the fascia, whether creek, road, or whatever, is named in this way, so operating crews know where they are.
As I have done with other geographic features on the layout, I have chosen road and creek names from actual features in the area I model, even though there was no actual SP branch line in the area. Use of locally familiar names is another way to help “set the scene,” so to speak.
This step completes the fascia in the Santa Rosalia area, and thus for the entire layout, since it is the last area being completed. I will return to progress here in future posts.
Tony Thompson
Posted by Tony Thompson at 4:44 PM