This series of posts began with a description of the Southern Pacific document called Circular 39-1, entitled Instructions to Station Agents and issued by the SP Accounting Department. That description and some insights into SP waybill form numbers comprised that first post (it can be found at: http://modelingthesp.blogspot.com/2016/11/sps-instructions-to-station-agents-part.html ). Following that introduction, I have posted three additional sets of comments on various rules found in the document. They can be readily found using the search box just to the right on this page, using an appropriate search term such as “station agents.”
An interesting part of the document relates to various issues in handling company freight, that is, materials owned by the SP and shipped between various on-line (or even off-line) points. I will begin with rule 1147. (You can click on the image to enlarge it.)

Unfortunately, waybill form 766 is nowhere described in this entire document, so I don’t know how different it might be from the standard waybill form. I have decided to go ahead and use the regular commercial waybill instead. Probably form 766 was intended to facilitate identification of the work order or job number for which the company freight was moved. I will return to this aspect in showing some model waybills, below.
Here is rule 1149, giving some additional detail about handling of company materials (and materials belonging to other railroads).

Unlike the content of rule 1147, above, this rule provides that commercial freight rates would apply to such shipments.
More indication that form 766 was set up for internal company accounting is given in rule 1154, and it also provides that an officer or employee must be shown as receiving any company freight.

Finally, a fascinating provision for maintenance of way cars is shown in rule 1156, setting a nominal value for the weight of contents, and likely the particular maintenance job giving rise to a movement of MOW cars would be charged on such waybills.

I have used some of the ideas about company freight in waybills on my layout. Track materials such as ballast and rail, as well as tools and supplies, can be waybilled to the track foreman at a particular location. Parts and materials can be shipped to the roundhouse machine shop in Shumala on my layout, and parts for repair, or scrap material, can be shipped out. I have also written waybills to move outfit cars, following what is shown in rule 1156.
I will just show two examples here. First, an inbound load to the outfit track in my town of Ballard, directed to a specific employee, the B&B (Bridge and Building) foreman. The load in this case moves in a Maintenance of Way box car. 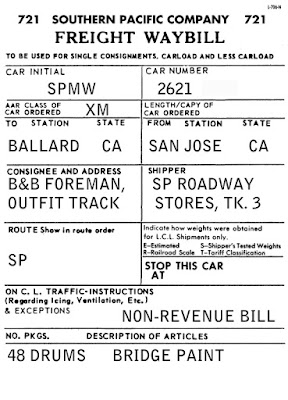 A second example is outbound scrap material for the machine shop at the Shumala roundhouse. I have seen SP waybills for scrap directed to the reclaim yard at Sacramento, so I think this is a realistic waybill, though not directed to a specific employee. 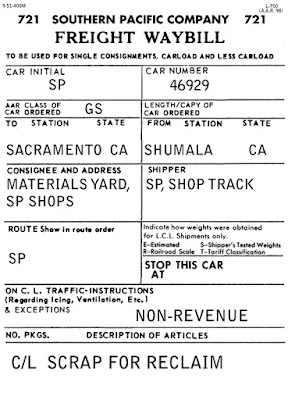 These examples are just some of the company-material car moves which provide both interest and variety in my operating sessions. I plan to create more such bills in the light of the Circular 39-1 rules shown in this post.
Tony Thompson
Posted by Tony Thompson at 10:57 AM