Paint patches on railroad freight cars occur for all sorts of reasons, but especially in the transition era, few cars were without them in the areas of the car where reweigh dates and places had to be stenciled, along with journal repacking dates. The first problem is to make such a paint patch, by hand with a brush, or with decal panels, as I showed in the previous post (it can be found at: https://modelingthesp.blogspot.com/2020/07/modeling-paint-patches.html ).
In this post I want to show examples of these applications, and to make a few comments on paint “matching.” Most reweigh events occurred on the owning railroad of the car; after perusing many hundreds of car photos for the transition era, Richard Hendrickson estimated that at least 80 percent of all reweigh symbols were for a car’s home road. (For background on reweighing, see my blog post at: https://modelingthesp.blogspot.com/2020/02/a-small-article-in-new-mrh.html .) Repacking, however, was much more frequent and happened all over the country.
To clarify, truck journals had to be repacked periodically, in the days before roller bearings, largely done on the basis of need, but with solid or plain journal bearings, this was done at intervals of a year or so. Like the reweigh date, the repack place and date was stenciled on the car, normally over the right truck.
This brings up a second point. Though sometimes a reweighing and a repacking would occur at the same time and place, thus having matching stencils, this was not usually true. And unlike reweighing, which required a scale, journals could be repacked at the smallest yard or junction. Often at such places there was not a selection of paint colors, but only one — usually black. Here is a prototype example (Richard Hendrickson collection). You can click on the image to enlarge it if you wish.

Note that the reweigh patch (at left) very nearly matches the car color, unlike the repack patch at right, which appears to be black. The date, location and photographer are unknown; but the reweigh location symbol, CR, indicates Cedar Rapids (Iowa), in August 1950.
Another example is below, an aluminum-painted car. Obviously few scale tenders or yardmen would have aluminum paint handy, and you can see here the black rectangles that resulted. The load limit and light weight have both been changed (at Bakersfield in February 1961); the black rectangle just to the left of the door is where the trust plate has been removed. A black repack rectangle is at right, above the truck.

This is a Wilbur C. Whittaker photograph, taken at Dunsmuir, California on June 10, 1962.
Obviously we can easily capture all these details of paint patches, using some of the techniques I described in the previous post (see link in the first paragraph of the present post). Let’s look at some examples. I will start with a model of a Boston & Maine box car, built from a Sunshine kit, with brighter boxcar red paint patches for both reweigh and repack. Here the paint patches are a little different color, either because they are cleaner, or because the location where the work was done did not have a paint matching the original body color. Both would obviously be common circumstances.

For another example, here is a car with the light weight and load limit both changed, but only in the last three digits of each. This was often seen when weights had not greatly changed. The reweigh is shown as occurring at San Luis Obispo in October 1952. 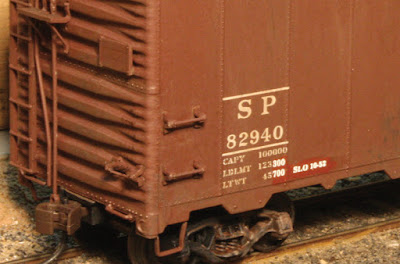 As I mentioned, not every place that may stencil a freight car can achieve color matching. I showed earlier how I make paint patches of other colors, such as yellow (see that post at: https://modelingthesp.blogspot.com/2020/07/modeling-paint-patches.html ). Below is an ART rebuilt reefer (Accurail model) with patches that are yellow (reweigh at left) and black (repack at right).

Last, I will show another example of a black repack, over the right truck as usual, though the reweigh patch (above the word “Pacific” on the side sill) is boxcar red. This model is a Red Caboose product, representing the SP Class F-70-7 prototype. The repack stencil here is taken from a Sunshine decal set. The Euclid scraper load is from a Stewart kit, which I have described in an earlier post (find it at: https://modelingthesp.blogspot.com/2016/05/vehicle-loading-on-flat-cars.html ).

I have usually applied boxcar red patches for both reweigh and repack, but do vary both patch colors on some cars for variety. That same variety is readily visible in prototype photos, and of course that’s the goal of this kind of project: making freight car models look like the prototype.
Tony Thompson
Posted by Tony Thompson at 11:39 AM