A small article in the new MRH

The February 2020 issue of Model Railroad Hobbyist (MRH) has just been issued, and can be obtained at their web site, www.mrhmag.com if you are interested. The “Running Extra” edition contains a short article by me, entitled “Reweigh Dates on Freight Cars.” My understanding is that my piece did not run in the “regular” issue, only in “Running Extra.”
This article isn’t something that I submitted, but was put together by MRH staff, and is essentially an updated repeat of an article I published in Railroad Model Craftsman or RMC, entitled “Reweigh Dates on Freight Cars,” and it appeared in the issue for April 2011.
I should quickly point out that several glitches did get into that RMC article in the process of the original magazine production. Accordingly, I created a corrected version, which was linked through my blog. You can access it, if you’re interested, at: http://modelingthesp.blogspot.com/2011/03/reweigh-article-from-rmc.html, and it at least corrects the worst errors and omissions in the RMC version.
But even beyond the corrections that were needed to fix the magazine article, I had not found out all the specifics of reweigh date history very far beyond my own modeling era of the 1950s, so in that way I was pleased that MRH decided to re-run this short article, with my updates through 1968. Thus the main benefit of the new article is the revised Table 1, a significant upgrade from the original RMC version, and it’s shown below. 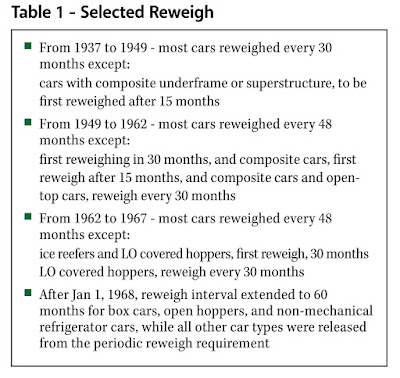 In a way, it’s embarrassing to have someone republish something already published (for the academic publishing world in which I spent my working career, it’s a serious no-no). But in another way, it's nice both to be able to add corrections, and also to make perhaps more widely available what I believe is basic modeling information. In any case, it’s out there now.
Tony Thompson
Posted by Tony Thompson at 9:51 AM