Awhile back, I posted a series of discussions about modeling of work or MOW (maintenance of way) equipment, in my case, of course, equipment of the Southern Pacific.  These posts were all titled with the words “modeling” and “MOW” so can readily be found using those search terms in the search box at right.
The first of those posts showed a couple of prototype photos and my models of an SPMW box car, and a water car (tank car). It can be found at: https://modelingthesp.blogspot.com/2013/03/modeling-some-sp-mow-cars.html . I followed that with a second post, in which I showed the modeling of an SPMW flat car, as well as a former PFE reefer in SP company ice service (that post is here: https://modelingthesp.blogspot.com/2013/04/modeling-some-sp-mow-cars-part-2.html ).
In Part 3, I showed my modeling of a former passenger car, converted to MW service, starting with an old Model Die Casting “old time” combine. This was a common SP practice, so something I wanted to add to my MW fleet. You can read the post at this link: https://modelingthesp.blogspot.com/2013/04/modeling-some-sp-mow-cars-part-3.html .
My fourth post in the series summarized the creation of SP’s MOW roster, and touched on operation, specifically showing a waybill for one of the SPMW box cars. (See that post at: https://modelingthesp.blogspot.com/2015/08/modeling-sp-mow-cars-part-4.html .) Lastly, though not an MOW topic, I showed a partial load of crossties in a revenue-series gondola, the kind of thing that may be part of MOW operations. That description is available here: https://modelingthesp.blogspot.com/2019/02/open-car-loads-ties-in-gondolas.html .
But what is really missing in all of the above is something beyond mere passing mention of operation. I do move the MOW cars in operating sessions, especially to the “outfit track” in my town of Ballard where work equipment normally sits. The former passenger car mentioned above is usually there, and often is joined by a brass Albrae Models fire car (see my post at: https://modelingthesp.blogspot.com/2018/04/a-southern-pacific-fire-service-car.html ) , or a water tank car. But what usually moves in or out are supplies cars, specifically SPMW box cars, along with revenue cars carrying ballast, bridge-gang timbers, ties, or rail.
For one example, creosoted bridge timbers, I have modeled another railroad’s flat car being used for such a shipment, as you see below. 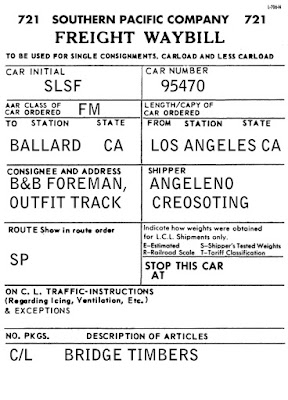 Here is the model (actually, one I inherited from Richard Hendrickson), looking like the first car in today’s local: 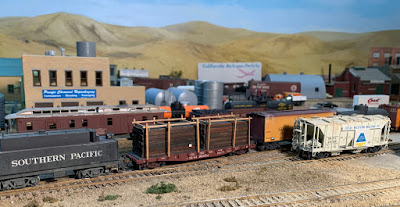 It’s well known that SP often used its revenue general-service (GS) gondolas for ballast service, as these could dump conveniently. An example of waybill for that is shown below, with an origin at one of the familiar ballast sources on the Coast Division, Granite Rock Company. 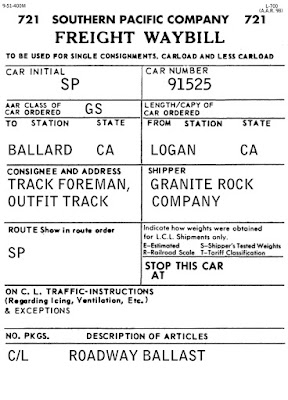 I also like to show some MOW activity using contractor railcars, such as the one below. In my modeling era, 1953, this was less common than in more recent years, but examples do exist from my era. Here is an example: 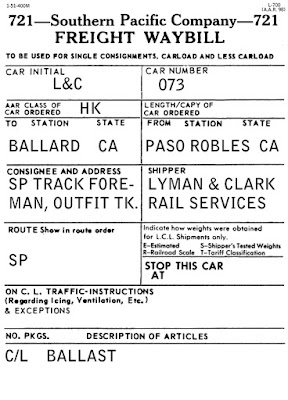 The model of this car is an Athearn “war emergency” hopper,, modified with longitudinal dump doors (barely visible in this view), and painted gray. The car is being switched at Ballard. It looks like most of the ballast in this load was already dumped, with only a small amount remaining.

These kinds of company traffic add interest to operating sessions, and of course provide activity for the MOW models of the different kinds I have. I am planning additions to the sorts of traffic shown in this post, and will be reporting those as they are developed.
Tony Thompson
Posted by Tony Thompson at 10:37 AM