One of the big operating weekends in the calendar is the biennial PrairieRail event held in Kansas City in even-numbered years. It’s not only big in the sense that Kansas City is one of the hotbeds nationally of model railroading, but also big in the sense that with so many excellent layouts, they can host over 100 operators, more than most such events. I’ve just returned from this year’s get-together.
The usual schedule is four operating sessions, Friday afternoon, two on Saturday, and Sunday morning. With a group of Westerners, I was able to participate in two additional sessions, Thursday night and Friday morning. I won’t attempt to document all the layouts here, and in any event, many excellent operating layouts are not visually striking. But I want to show a few highlights, and mention others.
Certainly one of the most visually stunning layouts was Jim Eudaly’s Hinton Division of the C&O in O scale. Located in a large purpose-built structure, it is remarkably complete and really repays photography. Perhaps more important, it operated flawlessly everywhere I saw. My job was as one of two hostlers at Hinton, a very busy job since every steam-powered train changed power here, many of them double-headers. We two hostlers were occupied every moment! Here is a view of the coal dock and service tracks, where locomotives rarely stood still for long. 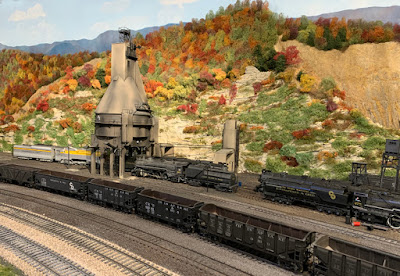 Another visually impressive layout was Doug Taylor’s East Broad Top, in HOn3. (He also has a rather large standard-gauge layout in the same basement, the Pennsylvania from Altoona to Pittsburgh (!), but my session was on the EBT.) My job was yardmaster at Mt. Union, the interchange between the PRR and EBT, thus with lots of dual-gauge track. Here is Doug’s rendition of the famous transfer crane, by which narrow-gauge trucks were fitted to standard-gauge cars so they could be moved over the EBT. 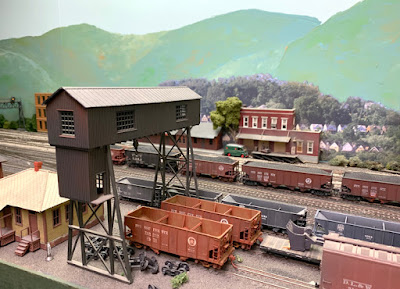 Another fine piece of modeling on this EBT layout is the famous EBT shops complex at Orbisonia. Still preserved, the prototype buildings are a remarkable peek into the 19th century, the interiors looking today much as if the workmen had just put down tools and gone to lunch. Doug’s model is excellent. 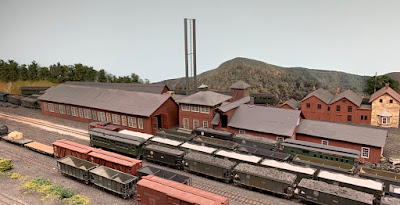 I don’t want to exclude mention of the really good operating layouts I experienced, from Kevin Leyerle’s OKT portion of the MKT, and Mark Steenwyk’s Milwaukee Beer Line (at the latter, I had the pleasure of using a ProtoThrottle; see: https://www.iascaled.com/store/ProtoThrottle ). I had been to both layouts before, and again greatly enjoyed them both.
A further layout of special note for me was Bob Willer’s Spokane, Portland and Seattle, a superb layout for timetable and train order (T&TO) operation, something I greatly enjoy, and a layout on which I’ve wanted to operate for years. And now I’ve been there, and it was great!
The last layout I operated on was Joe Kasper’s immense Marais Division of the BN, an N-scale layout that operated absolutely perfectly. My job was the Elevator Yard, located across from the main Murray Yard, and from my operating aisle, this was the view into that remarkably large yard. And as you might expect, all three Murray Yard personnel were pretty busy, for the whole session, not that I had much time to watch, with my own busy workload. And there is far more to the layout than this one view can show.

This was a great event, as it has been in past years, and there are still all kinds of layouts in Kansas City I have not been to. I guess I will have to keep on going to PrairieRail and discovering more of these great examples of model railroad accomplishment.
Tony Thompson
Posted by Tony Thompson at 10:28 AM