This post continues a series on the graffiti topic, and the predecessor posts are readily found by using “freight car graffiti” as the search term in the search box to the right. The most recent in the series is Part 5, about the process of re-lettering, in which a railroad or lessee worker recreates car initials and number after they have been obscured by graffiti, which is here: https://modelingthesp.blogspot.com/2020/02/freight-car-graffiti-part-5-relettering.html .
Continuing with the cement cars provided by Seth Neumann (his layout models Union Pacific in the Bay Area in 1999), I began with this BNSF car, an AC&F Center Flow design:

A second car in this series is an older Santa Fe cement hopper, of ribbed-side design, which already had a light haze of weathering:

This car, as an older car with long service, was planned to have heavier cement build-up and staining than the newer Center Flow car. I’ll begin with it. Here is the left side of the car, with a decal from Microscale set 87-1535.

Next is the right side, also using another Microscale decal (set 87-1534) to be able to work over the ribs, which are sharply rectangular on this model.

The other car, with a much newer paint scheme, should be more lightly weathered. But it will still carry graffiti. Here is the left side, with yet another Microscale decal (set 87-1534):

The right side of this model received two decals. At left is one from Blair Line set 2261, at right one from Microscale set 87-1536. This latter set from Microscale might not seem interesting, as it’s named “Irish and Scottish Graffiti,” but many of its contents are quite useful and not really different from American graffiti. I show the car below with some light cement staining. This car is a much later repaint, not long before the 1999 year of the layout for which these cars are intended, so only light staining is shown.

The other side of the car, shown one photo above, has now been similarly weathered.
Of these two cars, the boxcar-red Santa Fe car is obviously much the older paint scheme, so I gave it heavier cement staining. I will say more in a separate post about weathering for cement cars like these, but this car was originally a color which really shows the cement spillage. 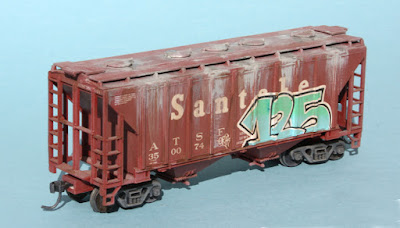 These cement cars have been an interesting challenge, both to apply graffiti and also to weather to varying degrees, appropriate to the age of the various paint schemes. It is a continuing project, so I will have more to say in future posts.
Tony Thompson
Posted by Tony Thompson at 5:43 AM