I began my descriptions of graffiti applications on “modern” freight cars with an article in Model Railroad Hobbyist or MRH, and my post linking to that article, including a brief description of my method of paper overlays for graffiti, is at this link: https://modelingthesp.blogspot.com/2020/01/my-latest-column-in-mrh.html . I followed that up with a description of a few additional examples of graffiti applications to models, in this post: https://modelingthesp.blogspot.com/2020/01/freight-car-graffiti-part-2.html .
That was followed by two sets of additional examples, continuing to show mixtures of graffiti decals, and my paper overlays, parts 3 and 4. Any of these can be found by using “freight car graffiti” as the search term in the search box at upper right.
I have continued to work on the representation of graffiti for post-1980 freight car appearance. My primary reference in doing so is the excellent book, Freight Train Graffiti, by Roger Gastman, Darin Rowland, and Ian Sattler (Abrams Books, New York, 2006). It’s a 7 x 8-inch book of 350 pages, and contains over 1000 illustrations of graffiti applications. 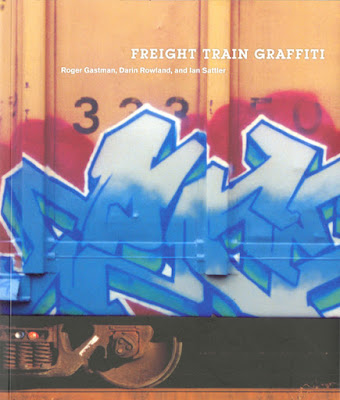 The book remains readily available from on-line sellers of new and used books.
I continue to photograph prototype graffiti, on both freight cars and buildings, as candidates for the paper overlay technique I described in the MRH article and in my post about the article (link provided in the first paragraph of the present post).  I have also harvested more images from the Freight Train Graffiti book (above), as I showed in the MRH article.
In the present post, I want to talk about “relettering,” by which I mean the re-creation of a freight car’s reporting marks, car  number, capacity data, or COTS boxes, by railroads or car lessees, after such lettering has been obscured by graffiti applications. I have seen examples myself, and there are good illustrations in the book I have cited in both the preceding posts, Freight Train Graffiti, or FTG.
I will use a couple of pairs of photos from the book to illustrate. The first one is an example of the graffiti having carefully avoided the reporting marks and car number of a BAR car, but covering the capacity data with the word “cycle.” A panel was painted over the graffiti to permit restenciling the required data (from FTG, page 262).

Another example of the graffiti obscuring lettering, this time covering all the lettering on the left of the Fruit Growers car side (it’s the word “krash”), which then got a new panel so all the obscured marks and data could be repainted (from FTG, page 263).

This kind of relettering is common enough, and of course understandable, for a wide range of types of repainting. Here’s another example of all the reporting mark-car number-capacity data being replaced, this time on two paint patches (from FTG, page 275): 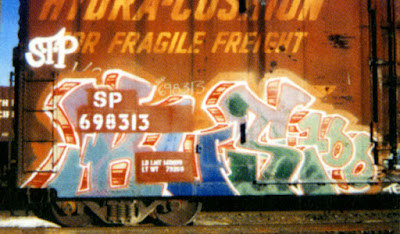 On one of the recent 1999 freight cars to which I was applying graffiti and weathering, a blue Atlas model of a 5700-cubic-foot car marked for Arco Polymers Inc., I decided to add a paint patch of relettering. Shown below is one side of this model, where you can see that I avoided applying graffiti over the car initials and number (the large graffiti application at right is a paper overlay, using an image from FTG, page 210). This car was also described in Part 3: https://modelingthesp.blogspot.com/2020/01/freight-car-graffiti-part-3-more.html .

On the other side, I deliberately applied a graffiti decal (from Microscale set 87-1536) so that it obscured part of the car initials and number. I then applied a rectangle of black decal, and used a “stencil” style lettering alphabet to replace those reporting marks. Below is the entire car, and at the right end of the car side is a paper overlay of the word “sicko,” another image from FTG, page 238.

Here is an enlargement of the replaced reporting marks.

This kind of relettering over or around graffiti is moderately common on prototype freight cars that have received graffiti. I will be exploring more examples of this detail in future posts.
Tony Thompson
Posted by Tony Thompson at 10:04 AM