This post continues the series of posts about applying graffiti to post-1980 freight cars. That topic began with my article in the January 2020 issue of Model Railroad Hobbyist (available on their website, www.mrhmag.com ) and described in this post: https://modelingthesp.blogspot.com/2020/01/my-latest-column-in-mrh.html . I followed that up with a description of a few additional examples of graffiti applications to models, at this link: https://modelingthesp.blogspot.com/2020/01/freight-car-graffiti-part-2.html .
The third post in the series was about a range of types of covered hopper car bodies, and continued to illustrate my use of both paper overlays and decals to apply graffiti to these cars. (That post is located at the following link: https://modelingthesp.blogspot.com/2020/01/freight-car-graffiti-part-3-more.html .)
I am continuing to work on cement hoppers from Seth Neumann’s layout, which models the UP in the Bay Area in 1999. This year, of course, falls well within the time period in which graffiti were not merely evident, but very much widespread. My goal for these cars was to accomplish a range of degrees of cement build-up, which visibly does vary within groups of prototype cars seen together, even ones of similar age. Presumably it is the result of varying accidental spillage from time to time.
Here is one of the cars in this new batch. An older car, still with its original C&NW emblem, its rib sides will necessitate decals for graffiti, since my paper overlay technique can only “snuggle down” over moderate contours on car sides.

The other car I will show in this post is also a former CNW car, now in UP paint and lettering, and an AC&F Center Flow design car.

I began with the rib-side car, since it takes a little time for decals to set down over the ribs. Shown below is the right side of the car (by definition, as seen from the B end). The decal is from Microscale set 87-1535.

The other side was also done with a Microscale decal from set 87-1535, and the first step in weathering has also been applied here, just a haze of brownish-gray overall and some light cement streaking.

The right side of the Center Flow car was chosen to use a paper overlay (at right). It’s by Bay Area graffiti pioneer “Crayone” and is the word “plan.” It’s from Freight Train Graffiti (Gastman, Rowland, and Sattler), page 93. At left is a decal, from Dave’s Decals set 6028.

On the other side of this car, I used two paper overlays, both from photos I took here in the Bay Area. One of them is the word "third,” shown below in its original form. After sizing it for HO scale and printing it, I simply cut out around the letters. Note here, by the way, that there are several layers of graffiti in this image, something seen on freight cars as well as walls. I plan to do this on a freight car or two. 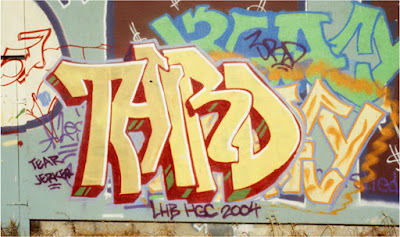 The other overlay is the word “pakos,” actually a nickname, taken from a larger wall piece. Together they create this look on the car side.

Note here also that the upper part and roof of the car is already weathered. As I have noted in other posts about weathering freight cars, this provides something to hold onto when the sides are subsequently being weathered.
Both these cars were to receive multiple steps of weathering, beyond what you see in the photos above. I will come back to those effects, for these and other cars, in a future post.
Tony Thompson