The annual national operating weekend, called ProRail, is going to return to the San Francisco Bay Area in April ( to learn more about this event, visit http://www.bayrails.com/index.php ), and I have volunteered to have my layout included for operating sessions. Accordingly, I am not only working on getting a bunch of layout projects finished, but am aiming at refinement and polishing of the operating scheme on my layout.
Among the work already done is the refreshing of scenic materials in areas that get wear during operating sessions, mostly along layout edges at the aisles, and in a few areas of older scenery that have gotten a little faded or dusty. In addition, industry structures are being checked for completeness, and things like window shades not previously completed have been added. Lastly, a few changes in operating scheme patterns have been modified with an aim to optimize how everything works.
To that end, I hosted operating sessions on February 8 and 9, the latter being the 52nd session on the layout in its present form. I will just show a couple of shots of crews operating. Below you see Bill Kaufman (at left) and Seth Neumann working at Shumala. Seth was the engineer at this point, and the conductor, Bill, is directing the next move, evidently to spot a car at the ice deck for initial icing. 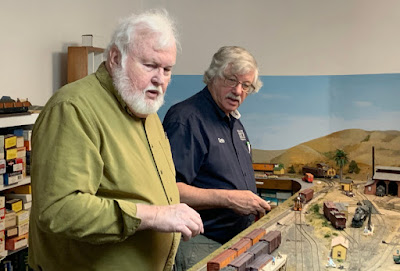 While those two were at work, on the other side of the layout in the town of Ballard, Jim Providenza (at left) and Clifton Linton were getting ready to switch. Jim was the conductor here and you can see that his train orders are in his shirt pocket. He’s working on a switch list for the work to be done in Ballard. Clif was the engineer and is holding a throttle. 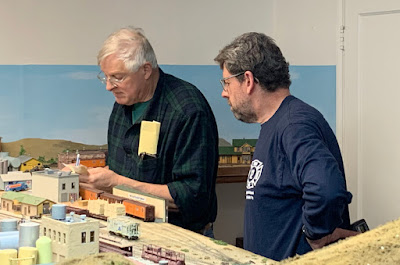 I have also done a fresh version of my “walking around” list of things that need to be done, large and small, for the entire layout (a previous post about this process is here: https://modelingthesp.blogspot.com/2018/07/management-by-walking-around.html ).
In addition to this effort, I am experimenting with a variety of switching and train moves, to evaluate possible changes in the operating pattern that is in current use. I usually run through the expected moves that are needed to implement any changes, to make sure that I like each change. The high-angle view of Shumala below shows an example. 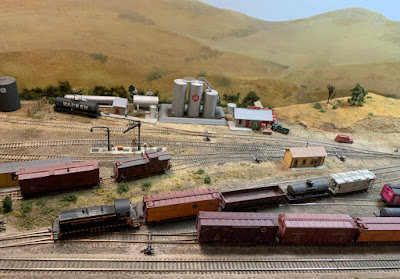 I certainly intend that these efforts will bring me closer to being ready for ProRail. I want the layout to be at its best for whatever state of completion exists at the time of the event.
Tony Thompson
Posted by Tony Thompson at 9:17 AM