My one concession to a (relatively) large industry on my layout is the company named in the title of this post, Jupiter Pump & Compressor, makers of both water pumps and air compressors. For a description of the starting points for this industry on the layout, you may wish to read this post: https://modelingthesp.blogspot.com/2015/09/jupiter-pump-and-compressor.html .
That first post was followed by some additional work, including adding an identifying sign; see: https://modelingthesp.blogspot.com/2015/10/jupiter-pump-compressor-part-2.html . Later I decided that the plant could have its own switcher for in-plant car movement, and thus the SP local train would not switch the plant, but would only set out and pick up from the plant’s lead track. For all that, see this post: https://modelingthesp.blogspot.com/2015/12/a-plant-switcher-at-jupiter-pump.html
But in front of the plant is a space that has been occupied for awhile by a cardboard model of a house with a green roof, one that I bought at a swap meet years ago. I wouldn’t defend it as more than a space-filling building. It doesn’t even sit flat on the site. 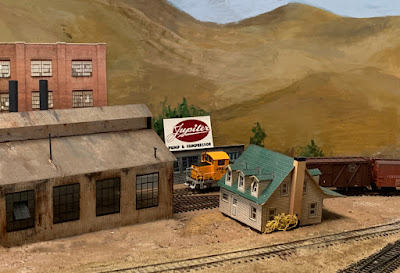 It is definitely time to make something better for this area! Ideally, I have always intended to build one or more structures for this space, that would be a suitable part of the Jupiter facility behind it.
The first step is to level the site and consider what should fill it. I have long imagined a ramp down to the area alongside the corrugated building (at the left of the photo above), and an employee parking area there. Some other structure can then replace that green-roofed model. Accordingly, I started roughly filling the low spots with Sculptamold, then refining contours with a taxidermists’ paper mache, Brandt’s Compound, which I’ve mentioned in a previous post (it’s at: http://modelingthesp.blogspot.com/2012/11/the-shumala-extension.html ).
With a base filler of Sculptamold (white), and the Brandt’s Compound (gray) completing the contour desired, the area looked like this after the rough installation. (Note at the back of the area that there is an opening below the backdrop, just to the right of the brick building flat, something also being fixed in this project.) 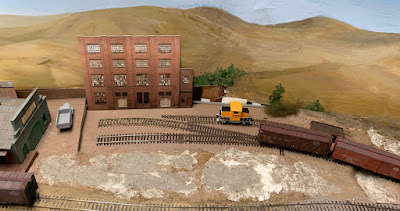 Incidentally, this high-angle view (not one that any visitor could have, unless over 7 feet tall), shows that the two tracks into the Jupiter receiving building do not actually connect with the switcher track. But with the building in place, this cannot be seen.
With this rough fill added, I used very coarse sandpaper to smooth off any roughness and obtain a fairly flat surface. Then, as I always do in these projects, I painted all the ground areas a base medium brown, my favorite “ground” color, Rust-Oleum “Nutmeg.” 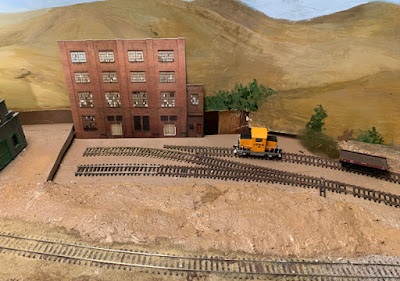 Obviously dirt and vegetation are needed, along with an indication that this is a roadway into the area, but that is straightforward work. I’ll summarize it later.
Another piece of work needing to be done was to apply a backing of foam-core board to the lower Jupiter building at the right of the tall plant structure (see top photo in this post). I also added a cut-out outline of some trees behind the building, to help hide the gap I mentioned. This simply sits in place at the back. Here you see the buildings all in place. 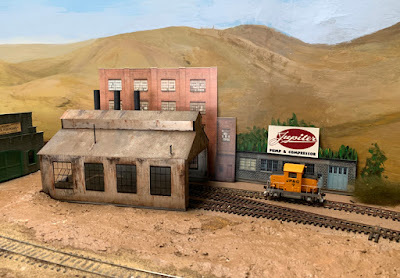 This completes some of the background area work that was needed, but there is more, as I will describe presently.
Lastly, I have chosen a new structure to build and put into place instead of the house with the green roof (though in about the same place). I will return to that in a future post also.
Tony Thompson
Posted by Tony Thompson at 3:00 PM