In my previous post on this topic (at: http://modelingthesp.blogspot.com/2015/09/jupiter-pump-and-compressor.html ), I showed the site for this industry and said a little about its traffic, along with preliminary work on an old Suydam kit structure to be used as a receiving building.
To signify a larger plant than what can be built on the layout itself, I added a KingMill Enterprises flat behind the Suydam building, as I showed in the prior post, and decided to add also a one-story extension of the plant to the right. This extension is a concrete block building, including in the KingMill “Jefferson St.” sheet no. 9.  (As I mentioned in the previous post, KingMill is no longer selling these sheets, which may have been sold to Scenic Express.) Trackage into the receiving building obviously is not yet complete. The photo below shows the industry as it was switched in the last operating session (see: http://modelingthesp.blogspot.com/2015/10/another-operating-session.html ).

Attached above the building extension you will see the signage for Jupiter.
In choosing a logo for my sign, I ended up with the following image, which perhaps will remind some of the logo of a fine brew pub here in Berkeley called the Jupiter. It has been and is an excellent pub for local beer and food, but as far as I know, they have never built any pumps or compressors. This adaptation of their logo should serve well to announce this industry on the layout. Here is a closer view of that image. 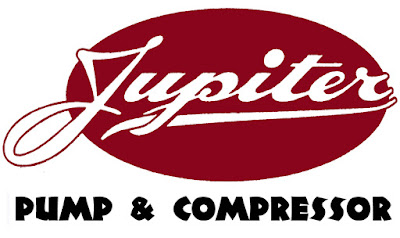 By the way, if you were curious, yes, that is a “red spot” behind the name.It’s even about the right shape, as you will see if you Google "Great Red Spot,” though I suppose a critic might say that the spot on the logo is only a pretty good red spot.
What remains to be done on my representation of this industry? I may add an additional building flat to the right of what you see in the photo at the top of this post, and some additional details need to be added around the area, and of course the receiving trackage needs to be completed, along with a switch machine for the turnout. And the lead track off the main crosses Oso Flaco Creek (for more on the construction of this creek, see for example: http://modelingthesp.blogspot.com/2015/03/modeling-oso-flaco-creek-part-2.html ), and a short beam bridge will be added there. But for now, cars can be picked up and delivered from the lead track which exists.
Inbound components to Jupiter include not only raw materials for the foundry and fabrication shop, but all the other parts which go into these products, from gaskets and valves and screw-machine products, to electric motors, gear trains, and electrical controls. There is a craneway inside the receiving building, so that open-car loads such as steel plate can be unloaded and moved into the warehouse. There is also a dump between the rails for bulk cargoes like coal. Though coke is an efficient fuel for remelting, as would be done at Jupiter, it is also more costly, and many small foundries continued to use coal. My schematic map for Jupiter will direct bulk and open-top loads onto the outer track, Track 2, while house car loads both inbound and outbound will work from Track 1, nearest the warehouse.
Waybills are being developed and a schedule is being created (a schedule for car flow into and out of the plant — as I’ve discussed elsewhere on this blog: http://modelingthesp.blogspot.com/2011/11/operations-demand-based-car-flow-2.html ) for Jupiter operations. I’m looking forward to including these shipments as part of operating sessions at Ballard.
Tony Thompson
Posted by Tony Thompson at 9:54 AM

Email ThisBlogThis!Share to TwitterShare to FacebookShare to Pinterest
Labels: My layout, Operations, Structures