In my prior post about the 35th annual meeting of the Southern Pacific Historical & Technical Society (which you can find at the following link: http://modelingthesp.blogspot.com/2015/10/sph-meet-2015.html ), I showed an overall view of the freight train I entered in the contest. I mentioned in the post just cited that I had been asked to show the entire train, with information about its makeup, in a future blog post, and this is that post.
My train was entered in the freight train category, and it won first place, by vote of attendees. Below, I show the certificate awarded, which is only included here because I thought the convention committee had chosen uncommonly attractive certificates, compared to some I have seen. 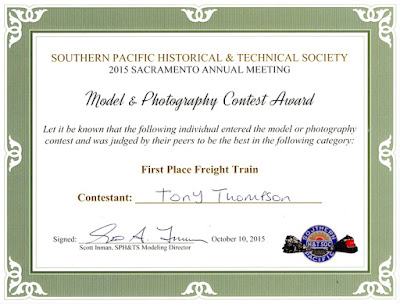 Before showing the train, I should mention that I deliberately chose a wide range of models for display, from Athearn “Blue Box” origins, to the latest ready-to-run (RTR) cars, and included a full range of car types (perhaps a little artificially for a single train). I will begin with the locomotive, SP 2763. It has been painted and upgraded, adding a number of detail parts, including cab window shades, crew, and cab curtains made from facial issue, and then lettered, and weathered.

Prototype: 2-8-0 Consolidation, Class C-9, built by Baldwin, March 1905
Model: modified Balboa (built by KTM) brass engine, detailed and weathered
The first car in the train was a reefer with steel roof but wood-sheathed sides and ends, PFE 73617. Construction of this model was described in an earlier post, at: http://modelingthesp.blogspot.com/2011/08/small-modeling-project-pfe-r-30-16.html .

Prototype: PFE Class R-30-16, rebuilt from older cars by PFE, 1940–1942
Model: a Red Caboose body, with parts from the late, great Terry Wegmann
The second car, another reefer, was a steel car, PFE 48137. Construction of this car was also briefly described in a prior post (see it at: http://modelingthesp.blogspot.com/2013/09/a-classic-ho-scale-car-kit-one-more-time.html ). 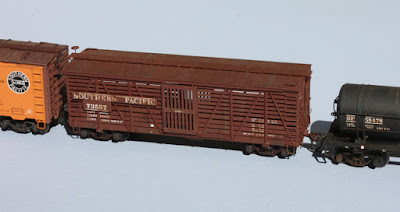 Prototype: SP Class S-40-5 stock car, 36 feet, built by Ralston Steel Car Company, 1917
Model: Red Caboose RTR car, factory lettering, Kadee Vulcan trucks
The last car I will describe in the present post is a tank car, SP 58478, which has the lettering familiar for many years, with the “diamond S” emblem on the dome. I always emphasize that this diamond-S emblem only indicates that the car has been modified to be suitable for liquid sugar service, not that it necessarily is currently assigned to sugar service. But this model does show lettering indicating it is in sugar service at this time. I should mention that upgrading Athearn “Blue Box” kit cars like this into models of SP prototypes has been described in my blog (at this post: http://modelingthesp.blogspot.com/2011/05/modeling-sp-tank-cars.html ).

Prototype: SP Class O-50-12 tank car, modified for liquid sugar service, built by General American, 1928
Model: kitbashed and redetailed Athearn kit, painted, decal lettering
I will stop at this point to keep this initial post reasonably short, and will continue with more of the train in the next post.
Tony Thompson
Posted by Tony Thompson at 7:21 AM