The 22nd annual meeting known as Naperville (though held in recent years at a hotel a few hundred yards outside the Naperville town line in adjoining Lisle, Illinois) took place during October 22–25. It was very similar in plan to previous meetings, with an extensive clinic program (four simultaneous talks during most time slots), a fair number of vendors, especially purveyors of photographs, and a large model display room which also hosted two very large layouts.
There was some significant news announced at the event. This meeting was originated by Martin and Patricia Lofton of Sunshine Models in 1994, and continued to be run by Martin and Tricia in Naperville for 16 years, until 2009. The meeting had been so successful that it became known informally as the “Freight Car National” or sometimes the “RPM National.” Starting in 2010, the organizer and director of this meeting has been Joe D’elia of A-Line, but the change announced this year was a change for future years, to the supervision of Mike Skibbe and his friends at Modutrak. It is to be hoped that this venerable meeting, located conveniently to a very large population of model railroaders, can be continued and even made better in future years.
As has been the case for several years, the meeting included a “Friends of the Freight Car” dinner. This year’s speaker was Pierre Oliver, who spoke on Friday about the Canadian side of prototype modeling. Here is Pierre, in the red shirt, beginning his talk. In the right foreground is Perry Sugarman. 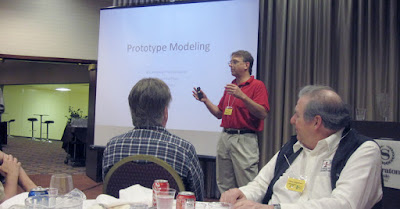 As always, there were a number of really outstanding clinics. I will not state all my favorites, but certainly one of the most interesting and dramatic was the one by Aaron Gjermundson on resin casting. Aaron had brought enough equipment to actually make some castings in real time! He had a variety of rubber molds, measured and mixed up some resin before our very eyes, poured it into molds, put the filled molds into a vacuum chamber to remove most air bubbles, and then into a pressure chamber to compress any remaining bubbles. These steps have been covered often in the hobby press, but to see it all done in a matter of minutes was indeed impressive.
Shown below is Aaron, standing in the olive green shirt, and to the left of him is Joe D’elia, who was trying to help with a computer problem. Standing to the right in the black shirt is Mike Skibbe, also trying to fix the problem. But it didn’t get solved, and Aaron then met the challenge of describing what he was doing, without visual aids.

I took a lot of photos in the model display room. Many were for my own interests and information, so I will just show a few of them here.One of the most impressive items displayed was this HO scale feed mill from Clark Propst, complete with appropriate freight cars (you can click to enlarge), 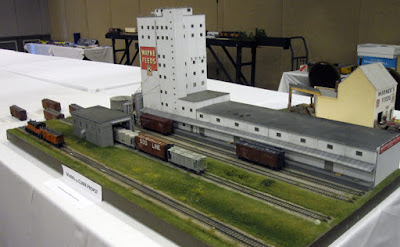 It is always especially interesting to see models in the process of construction, since so much can be gleaned about the work being done. Here is one example, from an extensive display of HO scale tank cars by Steve Hile. It’s on its way to becoming a General American tank car.

This is an Athearn underframe, appropriately shortened (see Richard Hendrickson’s article in Railmodel Journal, August 1996, pages 14 to 21) to accommodate an InterMountain 8000-gallon tank. Underframe modifications are mostly completed in this view, using Tichy brake gear, styrene shapes, and just visible at the ends, the fine Yarmouth Model Works sill steps with a middle rung. (To see these Yarmouth parts, you can go to http://yarmouthmodelworks.com/details.php and scroll down to the steps.)
Also of interest was a new model of a CB&Q drop-bottom gondola, shown by Ed Rethwisch, as you see here. 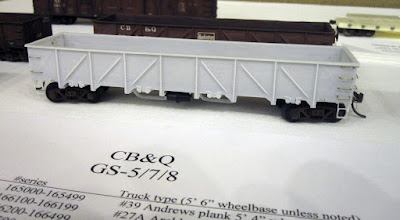 Lastly, I’ll show an overall view of the vendor room, which though somewhat more sparsely populated by sellers than in some years, nevertheless was busy between all clinic times and in the evening. Nearest the camera is the Kadee Products table, with Sam Clarke standing behind the table. Sam brought a number of the new Kadee tank cars, which sold out quite quickly. 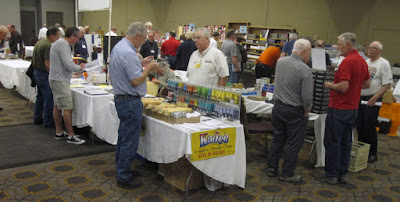 The meeting seemed about typical of recent years (Joe D’elia reported about 250 registrants) and socially it seemed very congenial, with a lot of networking taking place in the hallways, vendor rooms, bar, and lobby. I look forward to learning what changes and improvements Mike Skibbe may be making for future meetings.
Tony Thompson
Posted by Tony Thompson at 7:40 AM