Some folks reading the title of this post might think, “Why would we care about customers who are not rail-served?” (meaning, of course, on a model railroad layout). The answer is that they were actually quite important on the prototype. Many railroad lists of customers would show a considerable number with no siding, meaning of course that they had to work through a team track, freight house, or the freight section of a depot. Therefore these customers naturally offer a wonderful variety of possible load destinations and origins. Think of furniture stores, appliance stores, auto dealers, lumber yards, and a myriad of other retail establishments which might receive rail freight by unloading it directly from railcars, and conversely, of course, who might ship products out by the same means.
This means that some of the open-top car loads you may have, such as lumber, creosoted poles, structural steel, or crates of machinery, can be destined to a team track. And of course almost any load in a box car can be delivered to a freight house or depot. Most railroads referred to the track serving the freight end of the depot as the “house track,” and that would be indicated on the waybill for such a load. Though we don’t usually bother to do so on model waybills, prototype waybills usually gave specific spotting instructions (such as “Building 6, track 2”), or team track, or house track.
I have had visiting operators on my layout look at a waybill and say, “The bill says McKay Machine Shop, but I don’t see their siding.” I tell them to read the rest of the destination, which says “house track” (sometimes abbreviated by something like “HS TRK”). Here’s an example with an SP box car: 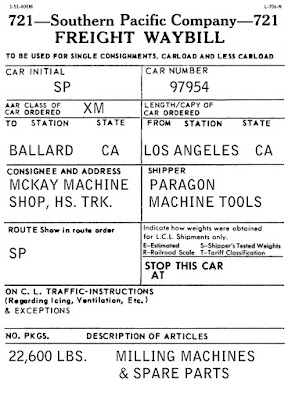 Here is the car identified in that waybill, at the Ballard depot. (The SP tried to keep its “Overnight” box cars in LCL service but did not always succeed.) One reason to ship to the house track instead of a team track is that there is a platform, which may help in unloading from the railcar, then transferring to a highway truck.

The same kind of thing happens with team track destinations, and though I emphasized above that open-car loads are quite appropriate, the same is true of house cars, as in this example. Plywood could, of course, readily be unloaded to a flatbed or box truck from the box car. 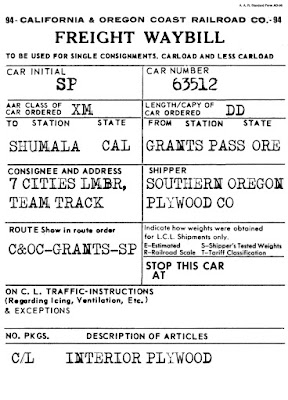 In a previous post, I showed an open-car load of concrete pipe in a PRR gondola, and its waybill, to illustrate that kind of example (at this link: http://modelingthesp.blogspot.com/2015/10/relocating-team-track.html ). Another example might be a delivery of lumber. This commonly took place on flat cars or (for finished lumber) in box cars. But on the SP, it was not uncommon to ship rough lumber in gondolas. This is an example.

Shown below is the waybill for this load of lumber, again with the team track destination identified with an abbreviation, “TM TK.” 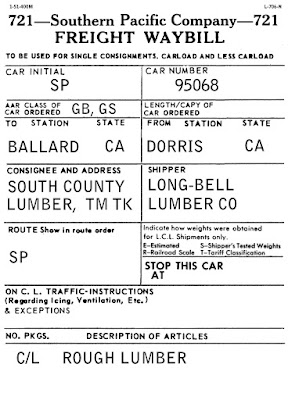 I hope that these examples indicate the kinds of opportunities presented by house track and team track destinations for freight cars on a layout. They certainly are effective in offering variety on mine.
Tony Thompson
Posted by Tony Thompson at 8:13 AM