From time to time, I am able to create an additional freight car I need by simply adding new decals to an existing or new model. Provided that a commercial model exists for the desired freight car, such work can be typical of what I call a “small modeling project.” An example of this, related to the present project, was the creation of a General Chemical tank car, which was described in an earlier “small project” post (you can see that post at: http://modelingthesp.blogspot.com/2012/10/small-modeling-project-icc-104-tank-car.html ). Rather than directing you there for the background, however, I will summarize it here.
Among the larger chemical companies in the United States in the 1950s was Allied Chemical & Dye Corporation. This company had been formed in 1920 by combining five existing companies: General Chemical Corporation, and the Semet-Solvay, Barrett, Solvay Process, and National Aniline & Chemical companies. All five continued to operate under their own names though owned by Allied, and those with existing freight car reporting marks continued to use them. In the early 1950s, Allied began to place its emblem on the freight cars of the five companies, including General, and in 1958 the entity would be renamed Allied Chemical Corporation, and at that time submerging the various corporate subsidiaries into a single operation. However, even then, the separate divisions continued to roster their own freight cars under existing reporting marks.
Most of the General Chemical car fleet in 1953 was tank cars, but they did roster a small number of 1958-cubic foot covered hoppers for the shipment of dry commodities. This size of covered hopper is exactly what InterMountain has produced in their square-hatch covered hopper model, which brings me to the present project. I purchased one of these cars in typical gray paint, and covered the reporting marks and car number of the manufactured car with the same color. I was then ready to re-letter the model.
The most visible and thus critical part of this lettering scheme is the Allied Chemical logo. I don’t know of one of suitable size in HO scale, but there is a Microscale N-scale set, no. 60-410, which contains such an emblem. (The corresponding HO scale set, 87-410, is intended for large ACF Center-Flow covered hoppers, and accordingly has a rather large Allied emblem.) Any of a number of alphabet decal sets could be used for reporting marks and numbers; I happened to have handy a Microscale set, no. 87-69-2, in black lettering, which includes 7-inch characters. The eight prototype cars were numbered 10000–10007. 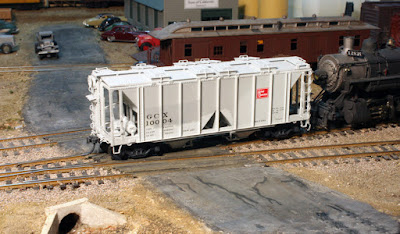 If nothing else, this reminds us that sometimes another scale may provide what we need, in this case decals. I have also used O scale decals in some projects.
I have not located a photo of one of the General Chemical covered hoppers, but given that in later years, several different sizes of covered hoppers assigned to Allied looked like the scheme I made, I think it is at least credible. At some point, General Chemical (and Allied) changed from Roman to Gothic or sans-serif lettering, but I believe it was later than my modeling period of 1953.
I now have an additional freight car to deliver dry chemicals to my chemical processing industry in Ballard on my layout. This helps with variety in operating sessions.
Tony Thompson
Posted by Tony Thompson at 3:02 PM