Team tracks are close to being “universal industries,” in that practically anything can be sent to, or shipped from, a team track. Even bulk cargoes can be loaded or unloaded with suitable equipment, and the same is true of liquids in tank cars. Because of this universality, I have a team track at each of my layout towns, Shumala, Ballard and Santa Rosalia, and in most operating sessions they are all switched.
This post is about the Shumala team track. Originally it had been located just off Railroad Avenue at the back of the town scene, and there was plenty of room to the right of the nearest industry, which then was the Coastal Citrus Association warehouse. The photo below shows the area, just behind the locomotive, extending from Coastal as far along the back track as the yard office at right. This was plenty of space even for a 60-foot flat car. The model pickup truck is parked right by the space. (You can click to enlarge.) 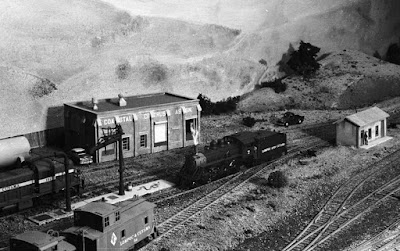 Naturally this location has continued to be called the team track, even though Coastal Citrus is moving to Santa Rosalia on the coast, and a new industry, the Associated Oil dealer, was put in its place.
But as it happened, Associated took up quite a bit more space than the Coastal Citrus building. In particular, it intruded into the team track space, because it extended farther to the right than the Coastal building in the photo above. Here is an overall view of the current area.

The problem here is that there is barely space even for a 40-foot car (the one shown, a Speedwitch kit for an SP gondola, is 50 feet long), and more seriously in my view, someone not familiar with the layout would not even realize that this cramped space was a team track. I began to look for an alternative arrangement.
An option might be to compress the space used by the Associated dealership, But once I determined that the Associated structures could not be placed much closer together than they already are, I realized something else would have to happen. I then remembered a bit of a blank space next to my stock pen at East Shumala, which is shown in the photo below. The truck parked just off Pismo Dunes Road (the gray area) at lower left center shows how far the under-construction additional stock pen will extend. The crossing of Roundhouse Street over the tracks is at lower right. 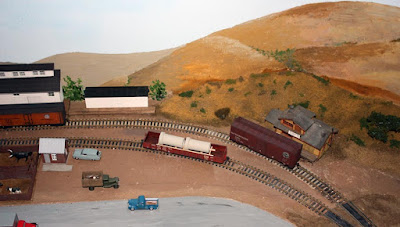 The area to the right of the cattle truck has plenty of space for team track operation, is right off a public road, and readily accommodates longer cars. And it adjoins the stock pen, also owned and operated by Southern Pacific, so a single office can serve both. Shown alongside the chosen location is a Westerfield Pennsylvania G22 gondola (you can read my post about it at: http://modelingthesp.blogspot.com/2015/09/another-signature-car-part-2.html ), with a load of concrete pipe; this is a Duha load from JWD Premium Products.
To illustrate the kind of waybills associated with this track, here is a bill for that gondola shown above. 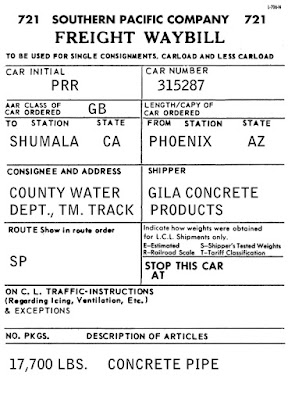 The new location is much better for team track use than the location previously identified, and to make it happen, all I needed to do was modify the schematic track maps for Shumala and East Shumala so that crews will know where it is. My maps are digital, thus easily changed, a feature I mentioned in an earlier blog post about my town maps (you can read it at: http://modelingthesp.blogspot.com/2014/10/my-column-on-timetable-construction.html ). And even better, waybills can stay the same, since the new location is still in Shumala yard limits. I’m much happier with the new team track, and am sure it will work better for layout operation.
Tony Thompson
Posted by Tony Thompson at 10:10 AM