This last weekend I hosted another pair of operating sessions, one Saturday and one Sunday, in the usual mode on this layout, of two two-person crews, one working each side of the layout, then switching to operate the opposite side in the second half of the session. These sessions were not particularly different from previous ones, except for a couple of changes I made to see how they would work out.
One new feature was the inclusion of switching at Jupiter Pump and Compressor in Ballard (an industry described in an earlier post, at: http://modelingthesp.blogspot.com/2015/09/jupiter-pump-and-compressor.html ). I included both inbound and outbound car movements, which seemed to work fine, even though, as shown in the post just cited, the actual loading and unloading spot tracks are not installed yet. The cars were moved to and from the plant lead only.
I also included some off-spot moves (cars not spotted at their final destinations, but instead left on nearby tracks by the previous switch crew), to see how these would work. These moves also worked pretty well. In this photo of conductor Robert Bowdidge (right) and behind him, Jim Radkey, you can see a crew involved in one of those moves at Ballard. 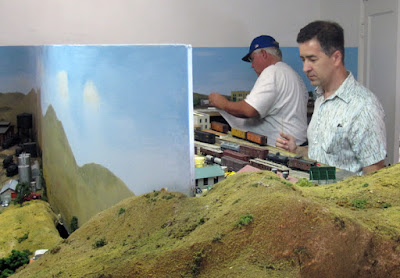 The view above is over the hill at the end of the peninsula on the layout, so at left is visible the backdrop and back edge of Shumala, but the two crew pictured are working at Ballard.
On the side of the layout at Shumala, I changed around the switching moves from what had been done before, and these too went smoothly, as far as I could tell. Here you see conductor Otis McGee (left) and Larry Altbaum working through their switching on Sunday. 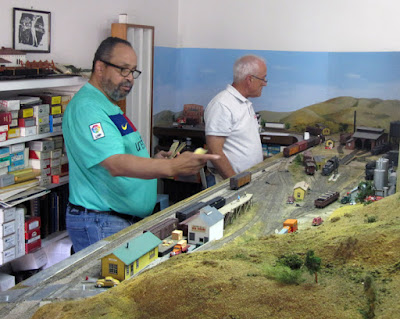 The last change I would mention for my operating scheme was that I included a confiscation, in which an empty car at one industry was to be spotted at a different industry for loading, something familiar on the prototype. This is not a complex concept, but I wanted to be sure my paperwork describing the moves would work. Here Ed Slintak, right, and conductor Mark Schutzer are working Ballard. The yellow NP reefer just under Ed’s elbow is the confiscated empty they moved. 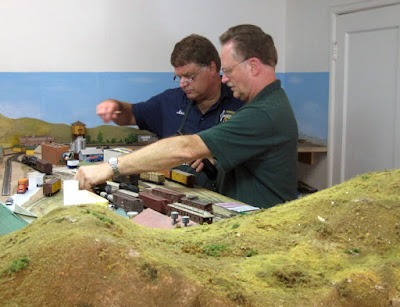 This session went well and completed the variations in operating patterns that I had wanted to try. I have since thought of a few more changes to try in future sessions, and part of the planning has been to balance the work load on each side of the layout, so that both crews finish their first set of switching at similar times, and can then switch sides. But of course the rate of work by any crew depends on the level of experience they have, as well as on the degree of familiarity with the layout. Most of the crews who have worked on the layout this year were new to it, and when people return for additional sessions, I am sure their rate of work will be higher.
One of the visiting operators was heard to say, “Gee, there really can be a lot of switching on a small layout,” and to me that was a compliment — exactly what I have been hoping to accomplish.
Tony Thompson
Posted by Tony Thompson at 9:56 AM