A major announcement for SP modelers has just been issued by Dry Creek Models (via its proprietor, Robert Bowdidge). The models announced are the SP Class W-50-3 gondolas, originally Hart convertible gondolas, later converted into dump-only cars by SP. The original cars are described fairly thoroughly in Volume 1 (Gondolas and Stock Cars) in my series entitled Southern Pacific Freight Cars (Signature Press, 2002). To see more about Dry Creek, visit their web page at: http://www.drycreekmodels.com/ and for more about this specific model, there is a connected page with more photos and description; the link is: http://www.drycreekmodels.com/w-50-3-as-made.html . That page shows the model exterior well.
The interior arrangements of this interesting prototype car are well shown in the three views below, from the 1912 Car Builders Dictionary. These are the three inter-convertible arrangements of this car design. (You can click on the image to enlarge it.) 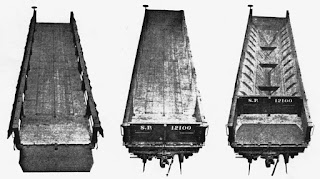 Shown at left is the “open” body arrangement, for pulling a plow through and driving the cargo out through the side doors (note they are slightly open from their top hinges); center, arranged with dump doors closed and ends set to be a flat-bottom gondola; and right, dump doors open to rest against the sides and make a center-dumping car. The new kits can model any of these three. But by 1940, SP had disabled the side doors, making these into primarily dump cars in their later life.
As background, I have previously mentioned Robert’s fascinating display of his 3-D printing process which produces these models as one-piece bodies. There is an overview of the display for Bay Area Prototype :Modelers (held last June) at this link: http://modelingthesp.blogspot.com/2015/06/bay-area-prototype-modelers-2015.html . Robert again brought some of his models, including flat cars and battleships, together with explanatory photos, to the SPH&TS meeting described in my previous post (you can read it at: http://modelingthesp.blogspot.com/2015/10/sph-meet-2015.html ), though in that post I did not allude to the display. A photo of it is below.

The photos at lower left show the processing in the 3-D printer, and at right center is an unpainted car body. I realize that even clicking on this image to enlarge it will not help much, but I wanted to remind those who saw the display that the models are now available.
These are very impressive bodies. I show below one of each kind of body offered in the Dry Creek kits, the gondola with flat floor, and the dump car. The kit, by the way, comes with very clear and complete directions for the steps needed to complete the model. 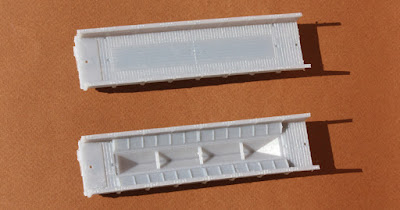 Not shown are the end pieces, which can be installed in the position desired (see prototype photo at top). The most impressive part of this model, probably, is the underbody, with the truss underframe correctly well back behind the side sills (unlike the Train Miniature model) and also prototypically dimensioned (unlike either the Silver Streak or Train Miniature models, the trusses of which are considerably oversize).

I am eager to add the few necessary details, like grab irons, sill steps, and brake cylinder, along with trucks and couplers, and put these beauties to work on my layout. Kudos to Robert Bowdidge for having the vision to realize they could be made by 3-D printing, and for having the persistence to work through all the development work to bring these to market. I suspect many SP modelers will want one or several of these superb models.
Tony Thompson
Posted by Tony Thompson at 10:30 AM