I introduced the topic of my stock pen at East Shumala with some photos as well as information from the prototype, in Part 1 of this series (it is at this link: http://modelingthesp.blogspot.com/2015/03/a-stock-pen-for-east-shumala.html ). I then showed construction progress of the main pens that came in the AHM kit, and a tankhouse, in Part 2 (it can be found at: http://modelingthesp.blogspot.com/2015/06/the-east-shumala-stock-pen-part-2.html ). But there were a couple of parts of the project yet to be done when Part 2 was posted. The present post describes one of them, the office.
To me, the missing element was an office structure that would look right. The brick building that was shown in Part 2, left over from another kit, really does not look right for a facility in the Far West. I decided to go ahead and make a suitable frame office from styrene. Looking at the site, and thinking about how much office space might be needed for a facility like this, I settled on an 8- x 18-foot building. Since it is an SP facility, I used shiplap or “novelty” siding, in this case Evergreen no. 4083. First step is to cut out all the sides, which I did by the usual method of scribe-and-snap.
Next step was to choose the office door and windows. I chose the Grandt Line 30-inch door with a window (Grandt no. 5028), one of the Grandt double-hung windows (no. 5117), and a horizontal sliding window (no. 5081). Once these parts were laid out with pencil on the back of the wall pieces, I then cut out the window openings with  a corner chisel (I showed the use of this tool earlier, at: http://modelingthesp.blogspot.com/2015/05/building-guadalupe-fruit-part-3.html ). Once the rough openings are cut, a flat Swiss file quickly cleans up the sides, with frequent checks against the fit of the Grandt parts. I really enjoy this part of a project like this, making the door and windows fit right.

Next came painting. First, the building was assembled with 1/8-inch square styrene strips in each corner. Then I airbrushed the walls with Tru-Color no. 153 (Colonial Yellow), and painted the trim strips, door, and windows with a lightened version of Tru-Color no. 163 (Light Brown), since I think their color out of the bottle is distinctly darker than the SP color drift panel. Last, I airbrushed Tru-Color no. 154 (Moss Green) onto a piece of Pikestuff shingle sheet (part no. 1015) from Rix Products, for material to make the roof. Here are the components at this stage.

Another feature I wanted to add, to make the building unmistakable, was a roof sign, of the kind visible in a number of SP photos. Here is an example, from an SP photo print marked “Fort Ord”  (California) on the back. The sign is above the right end of the freight car. 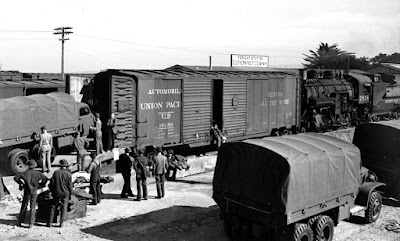 The end-door automobile car is UP 161089, Class A-50-14, built in 1937 with the then-standard Roman lettering, and still has its “NEW” weight stencil. The SP Consolidation, no. 2838, is lettered “SOUTHERN PACIFIC LINES” on the tender, which is pre-1946 lettering. My conclusion is that this photo probably dates from 1938. Why? The car is moderately dirty, thus not brand new, but the date is before 1939, when the car would have been reweighed. Anyway, here is a closer view of the sign atop the freight station.

The sign appears to have a dark, probably black frame.
I used SP’s “Egyptian” font for this sign, as that was pretty standard for signage. I glued the printed sign onto 0.040-inch styrene sheet, framed it with black-painted scale 1 x 8-inch styrene strip, and glued it to the office roof with canopy cement. 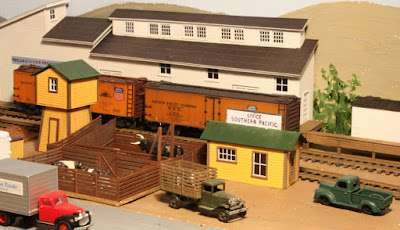 The sign looks a little larger than I expected, and I may replace it with something a little smaller. And the office needs a concrete front step. But for now it’s complete.
Having a better looking office (and one which better fits the space) is a step forward for my stock pen (which SP called a “corral”). The only remaining task is to add a third pen to make the facility a little bigger, as I discussed in the first post in this series (link shown at the top of this post).
Tony Thompson
Posted by Tony Thompson at 6:18 AM