I have written in earlier posts about my plans for a Jupiter Pump and Compressor Company plant at the town of Ballard on my layout, intended to represent one of the larger industries on the layout (see for example: http://modelingthesp.blogspot.com/2015/10/jupiter-pump-compressor-part-2.html ). I had always had the idea that I could suggest a much larger plant than there was space to actually model, by having a plant switcher and some non-interchange cars on the plant siding(s).
This idea had languished for some time, meandering along the lines of possibly a small steam engine, likely a tank type to keep the size minimal. Somewhere in all my stuff is an ancient Varney “Dockside” 0-4-0, suitably small but unfortunately all too recognizable as one of the hobby’s classics. There is also an 0-6-0 tank engine among my older models in storage. But no decisions had been made. This topic began to rise to the surface, however, with the completion of track to the plant, as shown in the post cited at the top of the present post.
I was still at the no-decision stage, when I happened to visit the Athearn booth at the National Train Show in Portland last August (as usual, in conjunction with the national convention of NMRA). There I saw their new EMD Model 40 locomotive, a very small industrial switcher. The light over my head definitely went on. Even though the model would not come equipped with DCC, it could still be used as a display piece, which is how I was leaning anyway. But at that time, the model was not yet available.
I did some quick checking to see if this locomotive might make sense on my layout. EMD built just eleven of these 300-horsepower units, between 1940 and 1943. Beyond the two engines which EMD kept as plant switchers, five of them went to the U.S. Army and Navy for switching on military bases, and four others went to the government’s Defense Plant Corporation. At least some became surplus after the war and ended up in a variety of places. I decided that Jupiter, being a west coast company, certainly could have acquired one from the military or DPC. All this started me itching to buy one, but Athearn continued to say that the model was “coming.”
Still, I could now think about how to manage the placement and even the use of this switcher. I had already organized a pair of sidings into the Jupiter plant. Maybe I could add a third, dummy siding as well, to display the switcher and probably an in-plant car or two. I have gradually accumulated several freight cars which would fit this category. As this “planning” slowly progressed, I heard from a source that you could now buy the Model 40 direct from Athearn, so I went ahead and did so. It arrived quickly and looked as great as I remembered from Portland.
As soon as I could get the locomotive lettered, I took this photo. The lettering is from an old Walthers alphabet set, “Square Gothic Extended #8,” which I had buried in my decal stash. 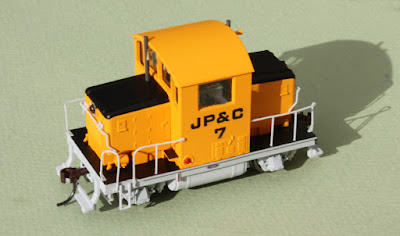 The locomotive received a little weathering, especially on the running gear, and was ready for placement on the layout, at least to try it out in the selected location for the dummy siding. I decided to try it next to an in-plant type of car I created some years back, a European side-door gondola fitted with conventional U.S. trucks.Here you see them on a piece of flextrack just set in place. Foreground track is also just resting in place. 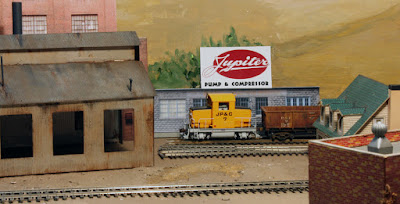 I think this will work out well, using the Model 40 essentially as scenery in front of the plant. And if need be, I might always be able to go back and squeeze a DCC decoder into it for operation.
Tony Thompson
Posted by Tony Thompson at 10:07 AM