I have written in numerous prior posts about oil companies, bulk oil dealers, and the tank cars owned by the oil companies. You can readily find those posts in the archive of this blog, by putting the desired key word into the search box directly to the right on this page. But I also wanted to show the retail side of this topic on my layout.
I have always planned to have a period gas station (or service station, if you will) on the layout. There have been plenty of gas station kits over the years, and many prototype stations were simple enough that they could be scratchbuilt without too much exertion. But there is an excellent gas station kit made by City Classics, which I especially like because when I lived in Pittsburgh, I knew City Classics’ proprietor, Jim Sacco, pretty well. That made me want to build that kit. It represents a “Moderne” style building, on which porcelain-enamel steel panels covered the building. The plain, glossy look led to structures of this style being called “iceboxes.” 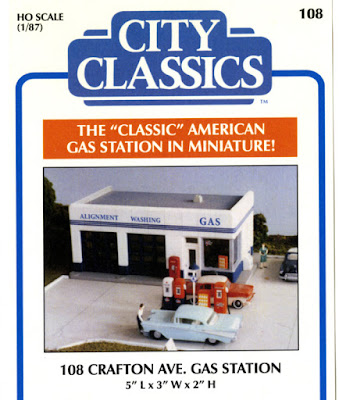 Very properly, the kit comes in plain white, and you then need to decorate it. Each oil company had at least a general standard of color use, lettering, etc., though individual stations varied considerably in some cases. I immediately started looking on the Internet to see what I could find, for period decoration, and in fact there are a lot of photos out there. There is ample modeling information for almost any oil company chosen.
I decided I should choose one of the oil companies already represented on the layout by a bulk oil dealer. Among them is a Union 76 dealer, as I have described (see:  http://modelingthesp.blogspot.com/2015/09/modeling-union-oil-dealer-part-2.html ). When I was a teenager, I tended to fill up at the Union 76 station near my home, so I naturally leaned toward doing the City Classics kit as a Union station. Here is a photo from the Phillips 66 website (the current owner of Union’s brand names), and it shows both the paint colors of gas pumps, and the use of orange on the building. It’s a large and more modern building, but shows the decoration theme. Pumps are white with blue on the sides. Other Union photos show orange used for a ground-level stripe around buildings, and in one case doors in the station were orange. 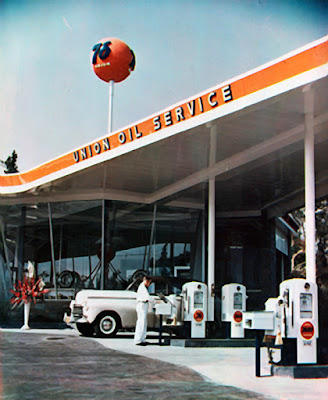 Another image found on the web is an older station, probably a one-off design, but of interest for its paint scheme. It was located in Big Bear, California. 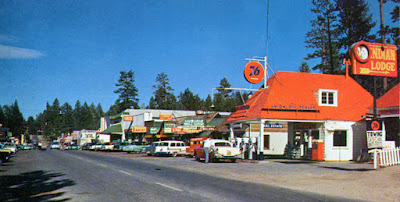 Just for background, Union Oil, founded in 1890, created its “76” brand in 1932, and continued in the consumer marketing business until all retail operations were sold in 1997 to Tosco, which in turn was acquired by Phillips, which became ConocoPhillips in 2002. In 2012, ConocoPhillips split into two companies, one of which, renamed Phillips 66, carries out consumer marketing, and uses the “76” brand today (though they have replaced the distinctive Union orange with red). Union’s corporate parent since 1983 was Unocal Corp., which continued oil production and refining after the sale of its marking division to Tosco, and was acquired in 2005 by Chevron.
So I had a clear idea of some paint scheme and decoration ideas, which would be easy to adapt to the City Classics kit. Even the pumps in the kit wold be easy to model, matching the ones in the upper photo here. I acquired some round orange “76” emblems on the web and tried printing them out at small sizes, to use on gas pumps as well as on the building itself.
The subject of gas pumps led to thinking about related issues, such as the price of gasoline in my modeling year of 1953. I suppose it’s no surprise that prices for past years are readily found on the Internet. I used this site: http://www.fiftiesweb.com/pop/prices-1953.htm , and learned that gas cost about 22 cents a gallon in 1953. It’s not an idle curiosity, by the way, since in that day gas prices were often prominently advertised at stations, and I want to do the same. The City Classics kit includes a curbside sign for regular gas at 23 cents a gallon, perfect for me.
With this research under my belt, I am now starting work on my City Classics filling station kit, to be branded as a Union 76 station. More later.
Tony Thompson
Posted by Tony Thompson at 9:54 AM