In the previous post (see: http://modelingthesp.blogspot.com/2015/12/modeling-insulated-tank-car.html ), I described the model I wished to build, and showed a photo of the Mathieson prototype car I wanted to use as a guide. At the end of that post, I had completed modeling of the new expansion dome and surrounding details. I then finished body work by adding grab irons at each corner of the tank, with 0.010-inch brass wire.
With Athearn tank cars, I usually decide whether to replace the handrail supports (that are molded onto the car body) on the basis of the final body color. If the body will be black or a dark color, those Athearn supports are not very visible and are acceptable to me. But if the body will be a light color, the clumsiness of the Athearn feature is all too evident, and then I remove those supports and replace them with Precision Scale brass ones (their part no. 32110). The brass parts are more work but look hugely better — if they will be seen. The car being modeled here will have a dark green upper body, so I did not replace the Athearn supports.
The Athearn handrails supplied nowadays are not too oversize, though back in the day these were quite big. They used to be 0.029 inches in diameter; now they are about 0.023 inches, a 20 percent decrease and an improvement in appearance. But they are still oversize. Nearly all prototype tank car handrails were made from 1-1/4-inch iron pipe. That “nominal” pipe size, as it is known, can be seen in any lookup table to be 1.66 inches outside diameter, which in turn converts to exactly 0.019 inches in HO scale. Here again, on a light-color tank body, I would replace the oversize handrail, but on a dark body like my model will have, I will retain the Athearn wire parts.
If the Athearn handrails are retained, then the question of replacing the Athearn ladders arises. Again, if they end up a dark color, they look all right. The one thing they do need is have the top filed flat, as the “bulges” of the Athearn design look quite odd and certainly not prototypical. This is a 10-second job, to go from the left ladder to the right-hand one:

My next step was to attach ladders and handrails, then airbrush the entire upper body Dark Green, while the lower body is black. The ladders then need to be touched up as black (see the prototype photo in the prior post) below the level of the bottom sheet, which is just visible here.

The body is ready for decals. In my decal stash I had Champ sets HT-211 (Mathieson) and HT-70 and -71 (GATX and SHPX). The Mathieson set had the MAWX reporting marks used on a minority of Mathieson cars, but most were leased from SHPX, so I decided to use those reporting marks. The GATX set supplied basic data for a car built by General American (the Athearn underframe is a GA design). For locating details, see the prototype photo in the prior post.
Meanwhile, I carried out my usual upgrades to the Athearn underframe. I separated the draft gear box covers from the rest of the Athearn center sill, and drilled and tapped the lid, and the center post in each coupler box, for a 2-56 screw. The brake gear is reasonably well located, but the parts of the brake rigging which extend to the trucks are not represented. I usually add wire or styrene rod. On this model, I used white Plastruct 0.015-inch styrene rod, as can be seen here. No piping has been added yet.

Also, provision must be made for a vertical-staff handbrake. For this, I usually fill the locating hole in the Athearn underframe with the Athearn handbrake stand, then cut it off flush with the deck. Then I drill for a brass wire staff and add a Tichy or other appropriate brake wheel. I also apply the Athearn placard boards, though they are oversize, because they are steel stampings and thus sturdy. When I glue a correct-size placard to them, the black border isn’t too obvious.
The assembled and lettered car is shown in the photo below. It still needs weathering, which I will do fairly lightly to indicate a recent coat of paint. A few chalk marks were added; placards will be attached after weathering. (You can click to enlarge.) 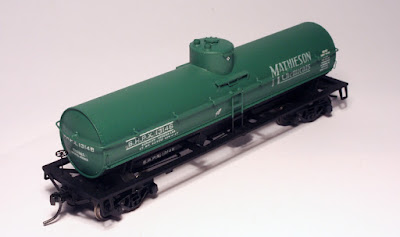 The trucks are Athearn with Reboxx wheelsets (I think the 0.088-inch wheel treads are essential on a model that has the wheels as visible as a tank car), and the couplers are Kadee #158.
This car makes an interesting addition to my fleet of insulated tank cars, though it would be a much more common car type if shortened to 10,000-gallon size, as I did in the Warren car I mentioned in the previous post. I plan to make another of the shortened cars in a future project.
Tony Thompson
Posted by Tony Thompson at 12:29 PM