Automobile cars were at one time a car category within the Association of American Railroads (AAR) classifications, namely any box car with double doors. They were still sub-types of the “X” classes, such as XAR for cars with auto racks, or XAP for cars restricted to auto parts, but were recommended to be lettered “AUTOMOBILE” on the car side. This applied to 40-foot, 50-foot, or other length cars, so long as they had double doors.
These cars were not, of course, restricted to service related to automobiles. Many railroads, including Southern Pacific, often would order as many or more cars without special equipment as those with equipment such as auto racks. The rack-less cars could of course be assigned to auto parts service, but at least on SP, were in considerable demand for lumber service. Rough lumber was ordinarily shipped on flat cars or in gondolas, but finished lumber usually moved in box cars, especially double-door cars which were easier to load. Empty Car Directives on SP often requested all empty, non-assigned double-door cars to be sent to lumber-loading areas, such as Eugene and Klamath Falls, Oregon. And naturally these cars would be used for any other large cargo.
I mention this versatility because of the thought process I use in assigning car service to the freight cars on my layout. I have a collection of automobile cars, both 40- and 50-foot length, and sometimes run them as an auto service train on the main line. (SP operated a train called the Los Angeles Auto Parts or LAAP on the Coast Division in the period I model, the early 1950s; these were auto parts which came over the Overland Route and then south to auto assembly plants in Southern California.) But I also gave some thought to ways automobile cars could have destinations on my mythical SP branch, the Santa Rosalia Branch.
An obvious one is lumber, as mentioned above. I don’t have any lumber yards on my layout, but team tracks were very commonly used to deliver cargoes like lumber, and I do have numerous waybills in my system for auto and box cars to deliver lumber to team tracks (and also for flat cars and gondolas to do the same). One can also imagine that a small-town auto dealer might receive assembled automobiles at a team or house track which had a suitable platform for driving the cars away. It’s known that an auto car which held, say, four automobiles might unload a couple of them at one town, and move on to another town for the remainder, especially at the beginning of a model year. I have waybills like that too.
But as I stated above, almost any load too big to load into a single-door box car, or too long for a 40-foot car, might travel in a 50-foot automobile car. Here’s an example I found on the internet, an Aeronca airplane, with wings and tail planes removed, being loaded into a PRR auto car. The truck is lettered for the Aeronca Corporation, located in Middletown, Ohio. Though Aeronca ceased airplane production in 1951 (I model 1953), it continued to produce aircraft parts for others, and also continued to repair, refurbish and resell older Aeronca airplanes. This plane being loaded may be one of the latter.

This is a classic example of a load which is bulky but not terribly heavy, and the auto car will easily carry both the fuselage and wings, along with other parts. It might go to an airport where there is a railroad spur, but could also be delivered to a team track.
I have a brass model of the same type of Pennsylvania auto car (mine is Class X32A), as you see here. The model is a Railworks product. It happens not to have the “AUTOMOBILE” lettering.

I have made up a waybill for a load like the airplane example you see above, for delivery via a team track. This is for a used airplane, probably refurbished, being sold from the Aeronca plant in Middletown. Middletown is served by the New York Central. 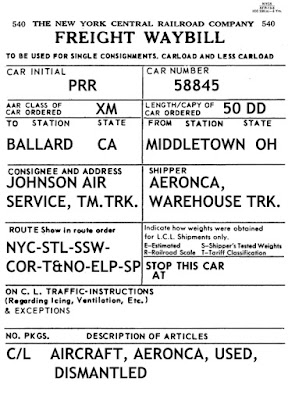 Once again, I have taken advantage of the “universal industry” characteristic of team and house tracks, as I have discussed in previous posts. Here is one if them: http://modelingthesp.blogspot.com/2015/10/operations-non-rail-served-customers.html . So you can take advantage of the fact that your team tracks can handle a wide variety of inbound (and outbound) loads, even airplanes!
Tony Thompson
Posted by Tony Thompson at 10:11 AM