Among the numerous waybill forms standardized by the AAR was one for “preferred movement,” and that bill is my topic for today. The usual standard waybill, the “general-service” bill, as it were, was AAR Form AD-98, and is familiar to most modelers through a variety of sources. Its use was mandatory, and it was to be printed on white paper. I have shown a typical blank waybill of this type (see: http://modelingthesp.blogspot.com/2012/02/waybills-18-resources.html ) and have also shown the process by which I modified the prototype form to achieve a compacted model version (you can read that post at: http://modelingthesp.blogspot.com/2011/02/waybills-4.html ).
There was also a livestock form (AAR Standard Form AD-101), printed on white stock, also a mandatory form, and a perishable form (AAR Standard Form AD-113), printed on pink stock, which was a recommended form. These were pretty much the principal forms which modelers need to recognize. But my topic here is an additional interesting one, the preferred-movement bill.
In essence, this waybill form, AAR Standard Form AD-111, was intended to be used for priority cargoes, and use of a different form was supposed to identify these shipments to clerks and others who might handle the waybill and assign priority outbound trains. It can be regarded as a “rush” waybill. Like the perishable form, Form 111 was a recommended, not mandatory, form, and is stated to be printed on pink stock.
The body of the form is not as important as the header, which was slightly different than for other forms, as shown below. This is just the top of the form, with the AAR Form info shown above it (all standard forms are shown with this sort of dimensional recommendations).

Note the railroad name arrangement, flanked at both ends by the AAR code number. I have put the complete AAR list of those railroad code numbers on Google Drive, as you can access from the post at the following link: http://modelingthesp.blogspot.com/2012/08/railway-accounting-code-numbers.html .
The Form 111 header above was scanned from the invaluable AAR publication, Railway Accounting Rules, which contains dozens of standard forms (and rules for using them, if you care about that aspect). I discussed that book in a previous post (see it at: http://modelingthesp.blogspot.com/2012/02/waybills-18-resources.html ); I use the 1950 edition of this book.
The body of this waybill was quite similar to the regular freight waybill, Form 98, differing only in minor aspects that I, for one, don’t feel the need to use as a modeler. So my own standard model waybill can be used as a “preferred movement” waybill just by changing the header, and of course printing it on pink stock.This will help operators on the layout identify the “hottest” cars for priority handling, just as it did on the prototype.
To show some examples, I have used foodstuffs directed to the wholesale grocer on my layout, Peerless Foods, and a shipment of parts vital to a time-critical item of production. at Jupiter Pump & Compressor. I suppose almost any cargo could be shipped under a “rush” order, but railroaders have told me that these kinds of waybills were not common, so I am only making a few. (You can click on the image to enlarge, if you wish.) 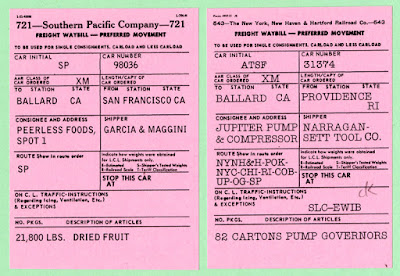 One of these is a food waybill, understandable as a preferred movement, but the other is chosen to represent urgently needed parts for production. The one on the right has a pencil notation on it, as I add to many bills, as a partial representation of the very common handwriting additions and corrections to prototype waybills.
These preferred-movement bills will add some variety to my waybill operation, and will serve, as does the occasional LCL waybill marked “stop this car at . . .”, to keep crews on their toes.
Tony Thompson
Posted by Tony Thompson at 10:21 AM