I have written in a number of previous posts about the Empty Car Bills of various railroads (see for example: http://modelingthesp.blogspot.com/2015/04/waybills-part-40-more-empty-car-bills.html ), and as time passes, more of these documents come to light. This post shows two interesting car slips from the Northern Pacific, sent to me in physical original form by Gary Wildung.
The first is yet another version of the Empty Car Bill, shown below. It combines the “home” routing with the “to load” routing, as do many examples of this type of document. And it seems designed for handwritten entries; the material is light card stock, about like a file folder. (You can click on the image to enlarge it.) The NP’s document date for this form is 8-51. 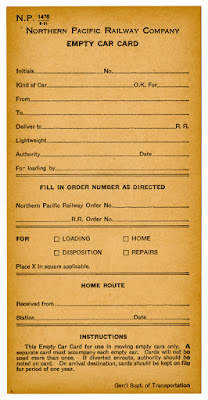 I also found it interesting that the NP used a Car Card for loaded cars, This is less commonly encountered among the railroad paper I have seen. It is intended for dispatch of cars for which the waybill has not yet been received, but which needs to move. It is dated 6-50. 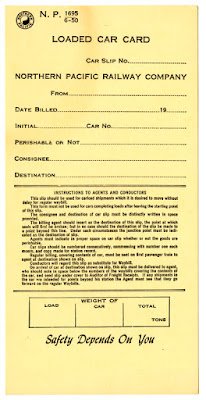 Interestingly, the instructions at the bottom explain that the slip should accompany the car to destination, and that the waybill, when prepared, will be sent separately to the agent at destination. Here is a larger image of those instructions: 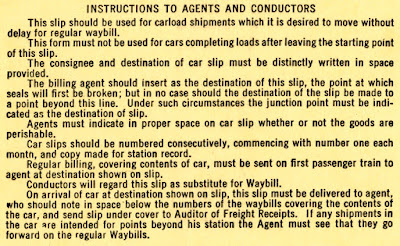 This document is a quite logical approach to moving a “hot” car when for some reason the waybill is not ready. I have not seen anything exactly like this for other railroads, but it could serve as an abbreviated waybill for those modelers who do not wish to make up full, detailed waybills, as there is less information required. Of course, if you used only these slips, visitors could wonder why none of the agents on the railroad could prepare a timely waybill. <grin>
Thanks to Gary for making these interesting car slips available. They may give those interested in model layout operation some idea for document design.
Tony Thompson
Posted by Tony Thompson at 12:06 PM