My title refers to John F. Vachon, one of the Farm Security Administration photographers in the late 1930s. Among his FSA colleagues were such famous individuals as Dorothea Lange, Walker Evans, Carl Mydans and Arthur Rothstein, not to mention renowned railroad photographer Jack Delano. Vachon worked for the FSA from 1936 to 1941, then for the Office of War Information (OWI) during 1942 and 1943, when the FSA photographic group was moved to OWI. As these were government agencies, all his photographs from this time (and those of his colleagues in the same period) are in the public domain and readily available in digital form from the Library of Congress.
One of Vachon’s assignments in the fall of 1942 was oil refineries, and he took many dozens of images, most at the Phillips refinery in Borger, Texas. (After leaving the OWI, he went to work as a photographer for Standard Oil, and created images for them until he joined Life magazine in 1947, and then Look magazine in 1949). There are several biographies of Vachon on the Internet for anyone wishing to know more about him.
Most of Vachon’s refinery photos show refinery equipment, and many more show refinery workers. But a few show tank cars, and are of period interest. Some of these images only depict tank cars in the background or in the distance, but some are closer up and very informative. I show below a few of these, and each is identified with its Library of Congress (LC) negative number. These and many more images are readily viewed at the Library of Congress website with the use of these numbers. The full negatives were scanned, so the surrounding black frame is shown too, and the OWI negative numbers are shown at lower right of each frame (you may have seen images like this published with only the OWI identification).
Here a string of Phillips tank cars is being loaded through the dome manway at Borger (LC-USW3-011623-D). 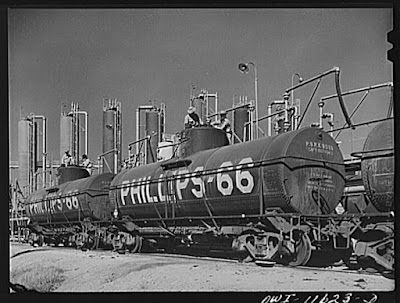 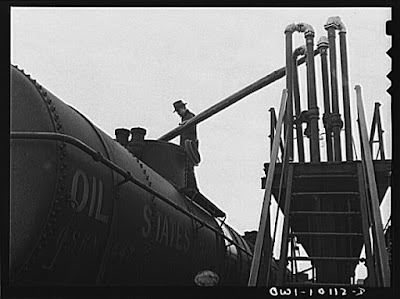 Another photo from the series shows a workman starting to open a screw-top manway cover (LC-USW3-010108-D). 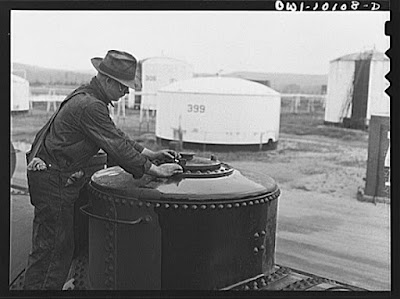 Note the shiny spillage on the side of the dome, more evident in the next shot of the manway open, and the workman dipping a sample of the cargo (LC-USW3-010110-D). 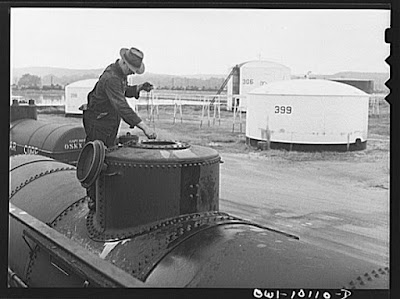 Loading was quite different for pressure cars (ICC 105A types), containing such cargoes as propane or LPG. Both sampling and inlet hoses were connected to valves in the valve bonnet (not an expansion dome). Also connected was a relief hose, to conduct away any air or vapor already in the empty car, as the liquified gas filled the car  (LC-USW3-010331-D). 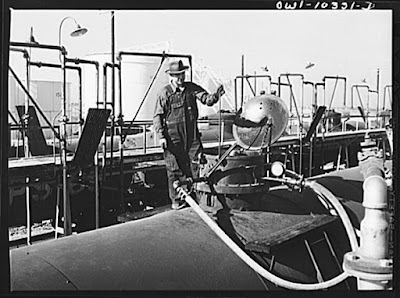 When loaded, the cars naturally received appropriate placards, as you see here with an insulated pressure car (LC-USW3-011346-D). 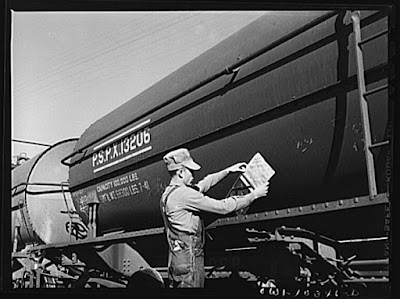 These kinds of images are very informative, as they can be found few other places. They literally relate of course only to 1942, but throughout the period from World War I until the late 1950s, these images are reasonably typical of tank car practice.
My upcoming column in Model Railroad Hobbyist, which I understand will appear in the February 2016 issue, is about prototype tank cars, and will hopefully explain many of the details shown in the above Vachon photos, for those who may not already recognize them. But none of the photos shown in this post are in that MRH column.
Tony Thompson
Posted by Tony Thompson at 6:39 PM