I am occasionally asked what car projects I’ve been doing. When a car project has some aspect that may be out of the ordinary in some way, I probably would write about it on this blog. But many cars that get completed are not particularly noteworthy, thus not ordinarily the subjects of posts. Still, I understand that readers may like to see photos of model freight cars. So in this post I show a few of mine that are recently completed.
I will start with a model kitbashed from an Athearn 50-foot gondola, with side sills cut down to a straight configuration, and with the addition of drop ends and a wood floor. This model, PMcK&Y 91783, is not an exact match to the Pittsburgh, McKeesport & Youghiogheny prototype, but is a suitable stand-in. The model was built some years ago, following a old Richard Hendrickson article  (Prototype Modeler, November-December issue, 1982, pages 12-16), but only recently completed. The load is made from soda straws (see the method at: http://modelingthesp.blogspot.com/2012/01/open-car-loads-pipe-in-gondolas.html ). You can click to enlarge. 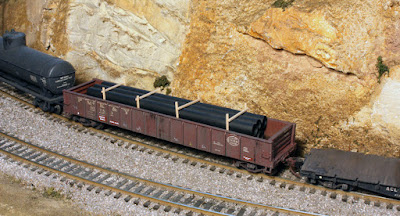 A resin kit I inherited from Richard Hendrickson was a C&O double-door box car with end doors, a Yankee Clipper kit (no. 1930.95). I had Dennis Williams build it, and as usual I did all the finishing. In the photo below, C&O 9742 is shown being picked up by the Santa Rosalia local from the house track at Ballard on my layout.

Here is another example, SAL 19107, railroad class B7, built by Dennis Williams from Sunshine kit 55.9, and lettered and weathered by me. I chose the prewar paint scheme with the plain railroad emblem (no red heart) and the Silver Meteor slogan. This is a distinctive Seaboard box car, one of the prewar classes with the “wagontop” roof (as Pennsy people called it), and with distinctive ribbed ends. It was photographed in a train just leaving Ballard on my layout.

I don’t own all that many brass freight cars, and most of them are tank cars at that, but here is one example of a brass house car, recently finished by me. It’s an Overland model, of a 40-foot double-door box car, single-sheathed and with wood doors, lettered for the Wabash prototype of this brass model, WAB 45218. It’s shown near the depot at Shumala. 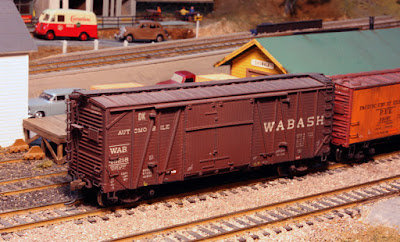 I should also include a recent ready-to-run car, so among the ones I’ve added lately is this InterMountain tank car, in the scheme of the Gibson Wine Company of Elk Grove, California. (Decals for this company in HO scale are available from Protocraft (visit http://www.protocraft.com/Majors.cfm?ID=1 ). The model is somewhat dirtied along the top, otherwise not very weathered. And because wine is a non-regulated commodity, it naturally has no placard. Here you see GATX 66714 being switched at Shumala. 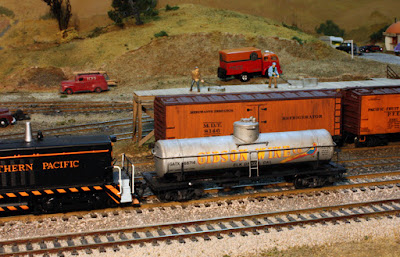 One naturally and correctly associates wine tank cars leased by winemakers as being used to ship product from that winery or wine company. But several pieces of evidence point to additional use for such cars, moving purchased wine from other wine companies to the car lessee’s property. (For more on wine as an industrial commodity, see my blog post at: http://modelingthesp.blogspot.com/2012/02/wine-as-industrial-commodity.html .) I envision this Gibson-leased car as doing just that, and being loaded with blending wine at one of the wine producers on my layout.
These cars are representative of my recent fleet additions, and I hope these photos will be of some interest. With luck, they might even provide a few ideas.
Tony Thompson
Posted by Tony Thompson at 6:57 AM