Reading the title of this post, you may be thinking, “Well, of course they have two sides . . .” but that’s not what I mean. I refer instead to freight cars with different lettering on each side. This is something I have not done recently, but Richard Hendrickson was fond of it for certain kinds of cars, and I thought it might be interesting to show a few examples.
(For anyone not familiar with Richard, his career, and a few of his accomplishments, you may wish to read my appreciation of him, which is at: http://modelingthesp.blogspot.com/2014/07/in-memoriam-richard-hendrickson.html . I have also shown some of his fine models of freight cars in a couple of previous posts, such as: http://modelingthesp.blogspot.com/2015/03/richard-hendricksons-multi-car-loads.html , and also a depiction of the variety of lumber loads he built for his cars; you can see that post at: http://modelingthesp.blogspot.com/2015/06/richard-hendricksons-lumber-loads.html .)
I will begin with a USRA gondola model, which was built from the old Walthers kit which had white-metal castings. Richard knew of several roads which still operated these gondolas with original wood sheathing as late as his modeling year of 1947, so built one model with two sides. Here is one of the sides, L&N 74348, with a load of metal scrap.

Note the end, which although photographed in shadow, is in fact seriously dirty from weathering. This might be a choice to show a dirty end, but has the convenience that now one cannot read road initials on the end which could conflict with the side lettering. Here is the other side, SL-SF 85327:

You will note that the weathering pattern and chalk marks are a little different on each side.
Richard had been the source of prototype information on the Mather Patent box car models first produced by Proto 2000 (now Walthers), and received a whole box of the cars when they were produced. He wanted to depict two of the smaller roads which owned (or leased) them. He chose the Illinois Northern and the Port Huron & Detroit (both schemes were offered on the Proto 2000 kits). This side is IN 2059. 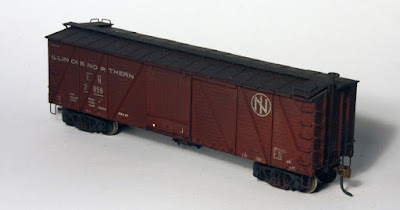 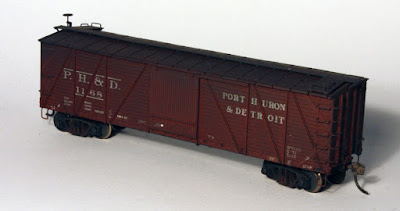 Another good prospect for this treatment is flat cars, partly because they have no end lettering. Years ago, Richard cut down a Roundhouse short flat car to make a gun flat. These are familiar as the Pennsylvania F22 flat cars, shown here as PRR 435376, shown at Shumala on my layout with a Westinghouse transformer load.

The Milwaukee Road had some very similar cars, so that was the basis for the lettering on the other side, MILW 67126.

On layouts like mine,where there is no reversing loop, and accordingly one always sees the same side of any rolling stock (unless it is physically rotated to show the other side), cars like this are very practical. But of course in staging operating sessions, the correct waybills have to be selected for whichever side is visible in that session.
I like the ability to portray more railroads with fewer models, and may construct a few cars like this myself. One additional possibility, for loads which need to be glued onto the car, is to have different road numbers on each side of the loaded car, and the same two numbers on both sides of an empty car, permitting the same two waybill pairs (loaded and Empty Car Slip) to serve both. And again, you do get two cars to operate, though both have the same load. This would be okay with a fairly generic load, such as lumber.
Tony Thompson
Posted by Tony Thompson at 8:56 AM