In the previous post in this series (see: http://modelingthesp.blogspot.com/2016/01/running-boards.html ), I discussed the arrangement of prototype wood running boards, and indicated some of the issues related to how models should represent prototype appearance. In the present post, I describe modeling approaches.
To start, it is easy to add a scribed cross-groove to any undivided running boards on a model. In the photo below, a scriber is being used to do so on a Red Caboose ice-service refrigerator car. 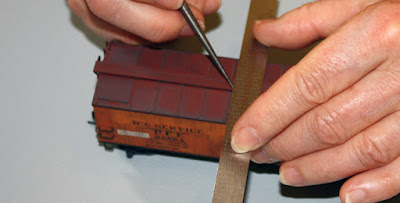 Next, variations in appearance can be added. As I mentioned in that previous post, there are several possible patterns of appearance on a prototype running board. First, individual planks may vary in how weathered or faded they look, though all were originally applied and painted at the same time. Second, replacement boards may be freshly painted (or even unpainted), then weathered or faded to varying degrees. And third, a plank may even be missing. In this post, I experiment with the first case.
If working to improve an existing model, the easiest way to vary the color of individual planks in running boards is to use color pencils. My experience with different brands of these, available at any art supply store, is that Prismacolor pencils are definitely superior for modeling. There are a great range of brownish-reddish colors, and several similar gray colors.
For grays, I usually use French Grey 30%, French Grey 50%, and Warm Grey 20% (I don’t know what the percentages indicate, but there are lots of them); for the reddish-browns, I use Sienna Brown, Chestnut, Dark Umber, Light Umber, Burnt Ochre, and Chocolate. These can be very lightly stroked over the painted and weathered running board surface of a previously completed model. For a model not yet weathered, more color could be applied, as weathering will then soften and blend it somewhat.
Shown below is the same Broadway Limited New York Central box car depicted in the prior post, receiving a little grayed color with Prismacolor 30% French Grey.

As another example, the photo below shows a Red Caboose SP stock car, getting a little variation in its running board paint color using Prismacolor Burnt Ochre. Some gray has already been added, and if the gray seems too vivid, it can be overcoated and softened with the reddish color.

Using these colors, the running board of the PFE ice service reefer shown in the first photo of this post was given a variety of varied looks. The scribed lines, which sometimes look light in color even if the styrene of the material is boxcar red, can be darkened with the sharp tip of one of the darker Prismacolor pencils. (Note that ice hatch are removed and the locations of the openings are blanked off, as PFE often did with ice service cars; ice bunkers inside the car were also removed.) You can click on the image to enlarge it if you wish.

I have been working my way through my freight car fleet, finding neglected running boards which need some variation in color. I have added this kind of weathering / coloring haphazardly for years, but obviously never consistently, because I am certainly finding a number of cars with running boards which need dividing into planks, or need color variation, or both. I will also explore more vivid variations in running board appearance in a future post.
Tony Thompson
Posted by Tony Thompson at 10:30 AM