In a prior post, Part 45 of this series on waybills (you can read that post at: http://modelingthesp.blogspot.com/2015/12/waybills-part-45-preferred-movement.html ), I described a special waybill form used for “preferred movement” cargoes, to make that particular car a priority handling car. But there are other standard forms which are also of interest, and in the present post I discuss another one used to make sure a cargo is properly treated.
Among the many specialized forms shown in that essential book, Railway Accounting Rules (AAR), is one to help ensure that cars that were to stop off en route, to partially unload or complete loading, were not missed. It was naturally called a “stop off” document, and was in fact an envelope, with the normal waybill inside. It can be found on page 184 of the book just cited (I use the 1950 edition).
The regular waybill would of course have the directions for the car to stop off at one or more locations, but this was evidently easily missed. And incidentally, I notice the same with people operating of model layouts — they tend not to read the waybill very carefully, and thus miss the stop-off provision. The document I am talking about, AAR Form AD-142, was recommended, not mandatory, and was specifically intended to help with situations where stop-off directions were being missed.
Though the prototype form was a manila envelope, I intend to use it as a supplementary waybill atop the regular waybill, and indeed, the form as designed has information on the exterior which can serve as a waybill. When the stop is fulfilled, however, the car then has a further destination, so the conventional waybill will also be provided crews for that second move.
Shown below is the form, as reproduced in the book. The very large center legend certainly ought to do the job of alerting crews. 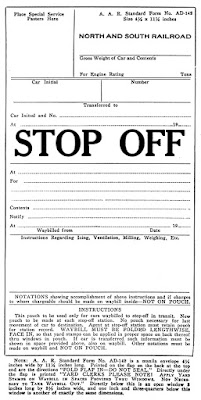 The directions at the bottom, having to do with placement of yard and junction stamps, are not needed for most model layouts and I will omit them. The directions at bottom also specify that this is to be a manila envelope, so manila-colored paper or card stock will be the material I use.
I simply worked with the scan shown above to alter shape and size to fit my waybill format, which is about 2.5 x 3.5 inches (baseball card collection size). The first one I made up was for Southern Pacific. The modified form then looked like this: 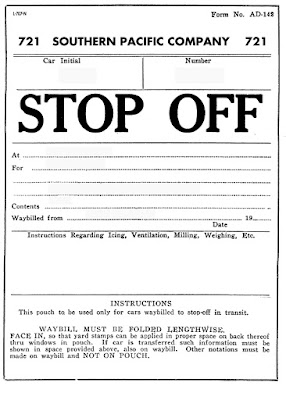 I have kept the center part of the form, likely intended for handwritten information, but intend to make up these documents as though typed. As mentioned, the material is supposed to be manila, so here is an example of my model implementation with manila cardstock, together with the accompanying waybill. You can click to enlarge. 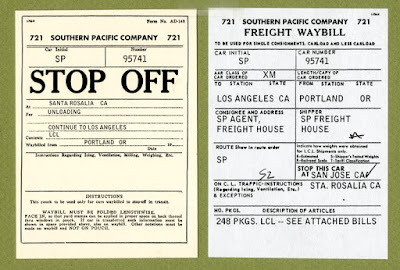 The Stop Off form will be placed atop the regular waybill, as I will use it in a plastic sleeve, and after making the stop identified, the stop-off form is removed, exposing the regular bill for continued movement, in this case to Los Angeles.
The same form can be readily adopted for the “Micro-Mark” size of waybills, as used for example on Otis McGee’s layout. One could either use the taller form like the prototype (see upper image in this post), or simply leave blank space at the bottom. I chose the latter, and here is an example of this particular form: 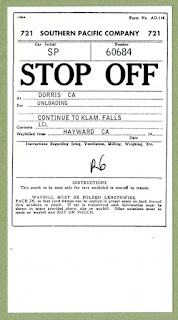 These Stop Off forms add variety (and hopefully interest) to waybill procedures on an operating layout, and should be the source of added attraction for switch crews which encounter them.
Tony Thompson
Posted by Tony Thompson at 1:15 PM