I recently received a question about tank cars by email, and it’s a very good question. I was asked, “How was a multi-compartment tank car waybilled?” As it happens, I was shown such a prototype waybill some years ago, and though I don’t know if that example was universal or even typical, I do at least know that one example.
(For a thorough and complete discussion of prototype tank cars with multiple compartments, see Richard Hendrickson’s article in the February 2015 issue of Model Railroad Hobbyist, available free to read or download at: www.mrhmag.com .)
In the example I saw, each compartment’s cargo was separately identified, and the gallonage shown. Multi-compartment cars normally had the gallons capacity of each compartment stenciled on the dome, along with an identifying letter (A, B, C, etc.), and usually the B compartment was at the B end of two- or three-compartment cars. That’s the scheme you see in this photo of a three-compartment GATX car (obviously converted from a single-compartment car, as testified by the smaller expansion domes at each end). The photo is from the Richard Hendrickson collection; you can click on the image to enlarge it. 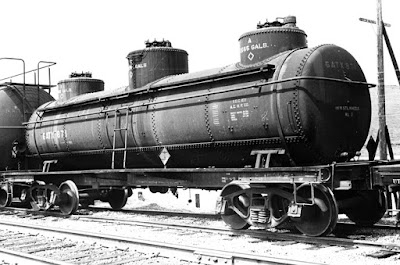 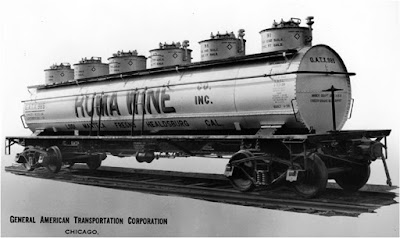 The particular model I am working toward at the moment is a Southern Car & Foundry two-compartment car, kit 2001. This represents a Standard Tank Car design, with its distinctive bolsters, and is similar to a Richfield Oil tank car of which I have a fuzzy photo. Here is the model, ROX 792, photographed being switched on my layout at Santa Rosalia; its dome walkway is on the other side. 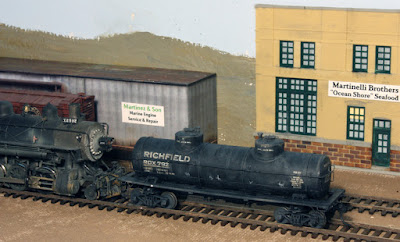 The waybill format I was shown, as I mentioned at the top of this post, is like the one shown below, and it is for the Richfield model shown above. It is for a load from the Richfield Oil Company refinery in Watson, California (now Carson), which was located on the Pacific Electric, to a bulk oil dealer in the town of Santa Rosalia on my layout. 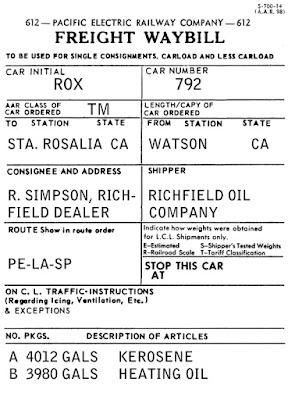 When this car is made empty, it returns to the refinery on a conventional freight waybill for privately owned tank cars, like the one shown below. These normally include the language shown, “record rights, reverse route.” The notation ”L / C” means “last contained.” Note also the common practice of the return “shipper” being the local agent, not the original recipient. 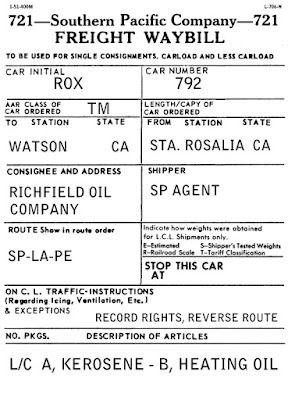 I have a number of multi-compartment tank cars in my fleet, and will develop waybills for them along the lines described in this post.
Tony Thompson
Posted by Tony Thompson at 10:17 AM