Why on earth am I posting about this? Over the years during which I have been writing this blog, I have gotten several queries about how to get Athearn parts, and as it happens, there were two such questions in the last month or so. Accordingly, I will briefly repeat my understanding of the situation.
Athearn does have a parts section to their website (you can visit it at: http://www.athearn.com/ and click on PARTS in the tabs along the top), but in their wisdom they show there only the very best selling parts of their entire line. As an Athearn representative said to me on the phone a few years ago, however, they do stock a great many of the parts which are not shown on the website, and are happy to sell them. You just have to know how to do so. The key is to know the part number, and then to contact Athearn for availability. The contact is their Parts Department, and you can email them at: parts@athearn.com . They will let you know the current price and whether the part is in stock. There is a significant shipping charge regardless of how small your order is.
I suppose the reason I am asked about this issue is because I have written a number of blog posts, and some magazine articles too, which use Athearn tank cars as a starting point or components for models. These tank car parts are usually in stock (if they are out of stock, be patient, as they tend to re-run them reasonably often — or at least they have in the past). It speeds up ordering to know part numbers, and in the case of the old 42-foot tank cars, these have not changed. They are shown on old kit directions, if you have kept copies. If not, I am going to attach them below. Note that the part numbers are helpfully listed in the lower left corner. You can click to enlarge the image. 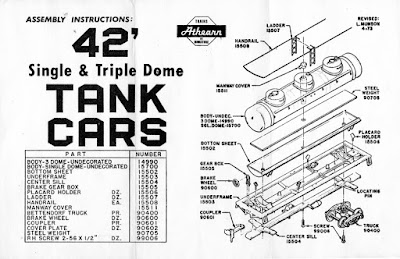 That is the “regular” tank car, sold as single-dome and triple-dome versions. I have used the triple-dome body (part 14990) for years as a sacrifice body, to cut off dome tops and raise the dome height to the correct size for single-dome cars. The other set of parts (for a car which in Athearn’s version is different only above the bottom sheet) is the so-called “chemical” car: 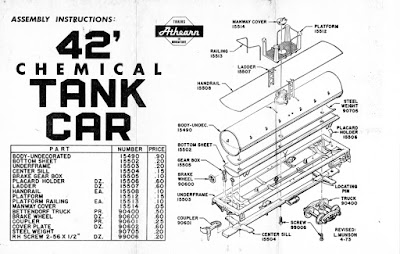 Here too, the parts are listed at lower left as well as called out for each part in the drawing which serves as kit assembly instructions.
In addition to the sacrifice triple-dome body, one can buy the principal underframe parts if intending to use it for a General American underframe (parts 15503 and 15504), as I have done on occasion. One example was a tank swap, using a cut-down Athearn underframe with an InterMountain tank (you can see it in this post: http://modelingthesp.blogspot.com/2011/01/tank-car-projects-for-cocoa-beach-2.html ). That same project was described in more detail in my article in Railroad Model Craftsman (the issue for July 2011).
On another occasion, I was trying to cut up a “chemical” tank car body, and got the thing angled in my miter box, thus cutting it rather unsquare. I just bought another part no. 15490 and did the job more carefully the second time.
I should say in closing that the old Athearn tank cars (all three described above) are really fairly crude by modern standards, with many details quite inferior to today’s models, and I am fully aware of those shortcomings. But as yet no one else makes a halfway decent General American underframe, which the Athearn parts can be converted into, and as yet we have no good insulated tank body suitable for kitbashing. I can hardly wait for the announced (and badly needed) 6000-gallon insulated tank cars from Broadway Limited, but for now, Athearn remains one modeling route we can use.
Tony Thompson
Posted by Tony Thompson at 10:25 AM