I have discussed previously the locomotive assignment booklets used for a number of years by Southern Pacific, and commented about how to use such a booklet for choosing my 1953 locomotives to model (you can see it at: http://modelingthesp.blogspot.com/2011/04/choosing-1953-locomotive-roster.html ). But I didn’t say much in that post about the assignment booklets themselves. I want to say more in this post.
Shown below is the cover of a typical booklet, this one for March 31, 1950. These were issued quarterly, and naturally describe all locomotives on the Pacific Lines part of the SP system (the summary shows system-wide totals for all Pacific Lines divisions). You can click on the image to enlarge it. 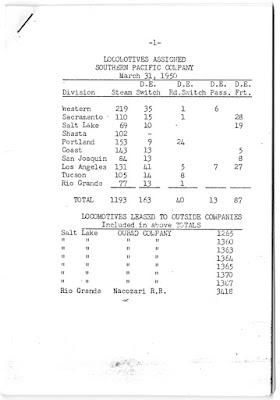 Within the booklet, each division had a separate listing. I show below the two pages for the Coast Division, which is the division within which my layout is sited. Of course this division extended far beyond the area I model, from Santa Barbara in the south, to San Francisco, and thus included the entire Peninsula commuter district (at that time, spanning San Francisco-San Jose). Here is page 11 of the March 31, 1950 booklet. 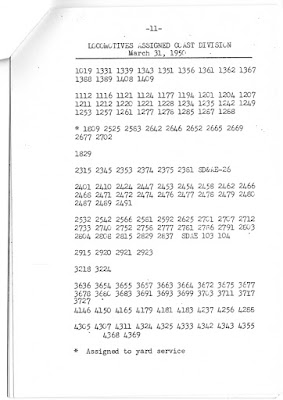 Note here that at this time there were 13 diesel switchers and 26 steam switchers, along with nine Consolidations and a Mogul also assigned to yard service, to do the division’s switching. In addition to large yards at Bayshore and Santa Clara, division point yards at Watsonville Junction, San Luis Obispo and Santa Barbara had to be worked.
The second page, page 12 of the booklet, shows the remaining engines. 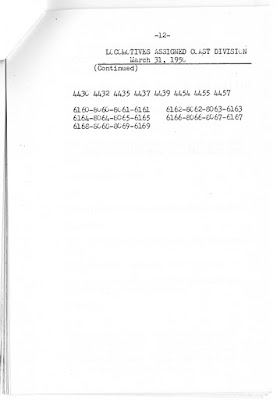 It is interesting, looking at these two pages, to see the large number of Consolidations, and the relatively small number of cab-forwards at this time, and only five A-B-B-A sets of F units. That would change as dieselization proceeded, because the new F units were preferentially assigned at first in desert and mountain regions, where their tractive effort and absence of water consumption made them big advances over steam power. Meanwhile, the displaced steam gradually migrated into California on the lesser gradient areas, including Coast Division.
Commute service on this division accounts for the substantial number of Pacifics, Mountains and GS 4-8-4s on the roster, relative to most other SP divisions at the time.
I have chosen my locomotive numbers from these assignments, combined with examination of yard and roundhouse photos at San Luis Obispo, the nearest locomotive facility to my layout’s mythical Santa Rosalia Branch. Among the Consolidations listed on page 11, you can see numbers 2592, 2752, and 2829, all of which are on my layout. I also have an S-2 diesel switcher no. 1389, which as you can see was also on this division. The booklet shown above is for 1950, but in 1953 these same engines were still at San Luis Obispo.
I discussed these same issues, and showed a San Luis roundhouse photo, in the post cited at the top of this post, along with showing a 1952 locomotive assignment sheet.  One of the truly distinctive locomotives assigned for years at San Luis Obispo was Consolidation 2592. In the last years of its active life, it had a “whaleback” tender inherited from an early cab-forward. Here is one view of the engine switching at San Luis Obispo, taken in January 1954 by Rod Crossley. Note that the road name on the side of the tender is smaller than was standard after 1946. 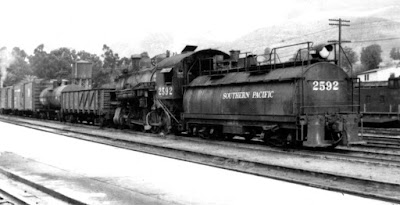 This locomotive is Class C-9, built by Baldwin in 1906, and like many Harriman Consolidations, so useful that it remained in service when newer and more modern engines were going to scrap.
Here is my model of SP 2592, switching on my layout at Ballard. This model combines a Key brass SP 2-8-0 with a Westside brass tender, making this a distinctive locomotive. Today it also has DCC and sound, thanks to Al Massi.

This single locomotive example illustrates one way to use the assignment sheets, combined with photographic evidence of how locomotives were configured and even lettered, to provide a realistic part of a layout locomotive fleet.
Tony Thompson
Posted by Tony Thompson at 3:16 PM