A visit to Cuba

I’ve just returned from a visit to Cuba on a licensed “People to People” tour, and there were plenty of interesting aspects to the trip, but here I will just write about the railroad and modeling aspects of interest.
First, a little history. Cuba developed a rail network very early, plenty of it to serve sugar mills and plantations, but plenty more to connect cities. By 1958, Cuba had the most rail mileage per square mile of any country in the world. After the 1959 revolution, the existing railway companies were nationalized as Ferrocarriles Nationales de Cuba, which they remain today. An unfortunate aspect of a single national railway entity on an island is that there is no need to letter the name or even the initials of the owner on any equipment; there is no interchange. Rolling stock thus has a rather bare look, often bearing only a number and some very minor dimensional data.
The FC, as it’s often designated, dieselized its main lines in the 1960s, and sugar operations gradually followed suit, eliminating steam on even the most backward plantations by about 2000. But many small steam locomotives have been preserved, and a few restored for tourism. Because of the U.S. embargo, new locomotives and rolling stock have been purchased elsewhere throughout the world, from the Soviet Union and China, to France, Germany, Britain and countries in eastern Europe, and in recent years, even freight cars from Iran. The resulting fleet is polyglot, to say the least.
I will only show a few photos, and apologize in advance for not knowing more about the prototypes. I searched a number of Cuban bookstores for locomotive or train books, and found almost nothing. The internet coverage is spotty and sometimes contradictory. I hope anyone with a more substantial knowledge of the subject can help. But these are only intended as illustrations.
In Camaguey, the old railway station is terribly decrepit, though restoration is in progress, and a small replacement depot was very crowded. I was able to watch and photograph from trackside considerable switching activity, including adding cars to a departing passenger train, without attracting the least attention. Here is one of the Russian-built locomotives, no. 81001, I believe type TEM2, of which I saw several on our trip, in the red and yellow scheme which seems to be for freight power. These things sound a lot like Alcos.

The passenger power largely seemed to have an attractive scheme of dark and light blue. Passenger rolling stock ranged from stainless cars built by Budd, to very run-down standard steel coaches, to newer center-entrance cars looking much like box cars, and apparently built new that way. Note over the door the initials FC, not visible on many cars or locomotives. 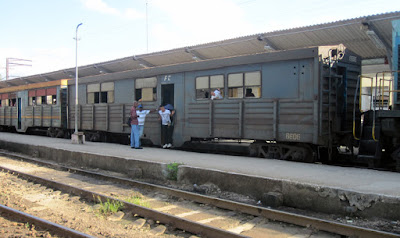 The Chinese company, formerly called China North Locomotive and Rolling Stock Industry (CNR) sold a fair number of locomotives to Cuba, and if I correctly understood the halting English of a trainman standing alongside one of them at Camaguey, they are hard to keep running.
In a couple of places there were switchers in a pleasant orange and gray scheme, like no. 38063 here, but I have not been able to find out where they were built. It was picking up this head-end car.

But enough about rolling stock I didn’t understand very well. The most stunning thing about Cuba, speaking as a modeler, is that walking in every city is like being in a 1950s movie. New American cars stopped arriving in Cuba in 1959, so there are 1950s American cars just everywhere. I knew they were there, but really had no idea how prevalent they are: they are not exceptions, they are the dominant car on the street. And even cars from the late 1930s and the 1940s can be seen too. I will only show a few of the many photos I took, and I can tell you, I plan to duplicate some of these models (though not the colors) on my 1953 layout.
Many of the restored cars have been repainted in brilliant colors, and few have that many original mechanical parts. Suspensions are visibly altered, almost every car has modern wheels, and I was told that engines are rarely original (as was often evident from the sound). Many Russian and European parts have kept the cars running, and even homemade parts are used, attempting to replicate the unavailable American originals. There are lots of convertibles, partly because many of the cars are in use as privately-owned taxis, but there are also “classic car club” stickers on many cars. Owners are usually very proud of their car, and most speak English and are delighted to speak to an American.
I am interested in correct model years, partly for modeling reasons, but I found car-spotting in Cuba to be a challenge. Not only may such spotting features as chrome trim as well as tail lights and other items be missing or replaced, even major visuals like grilles may be swapped. I saw an early 1950s Chevrolet with an unmistakable Buick grille, and a 1940s Ford with a unique homemade grille. This makes one a little cautious about identification of an individual car. So I will just show a few of the photos I liked. The massed taxis at places like the Parque Centrale in Havana are one good illustration, of the variety, the frequency of convertibles, and the bright replacement colors.

Another street scene in Havana found my wife Mary alongside what I think is a 1951 Chevy sedan, clearly with replacement paint though otherwise looking more original than most. But like nearly every car, hub caps have vanished over the years. 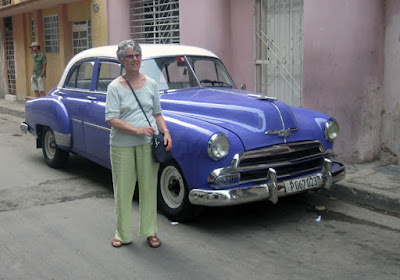 Here are a couple more that I really liked seeing, first a handsome 1955 Ford at a cafe on the road heading for Havana. 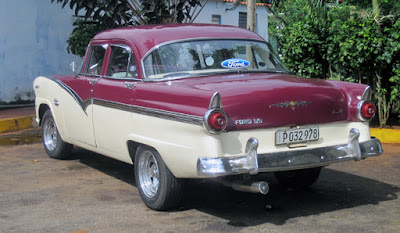 Last, a superb Studebaker on the main square in Cienfuegos, I think a 1951. We also saw Edsels, International and Dodge pickups, and many more . . . but I digress. 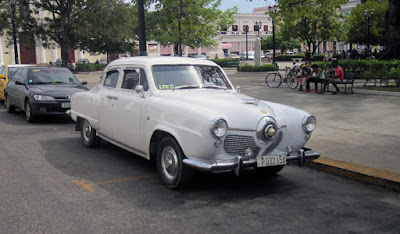 You can see that it was a visually interesting trip, and of course fascinating in many other ways too, most enjoyable for us both.
Tony Thompson