Most of us have a stash of kits and materials, sometimes impressively large (I’ve known modelers whose stash rivaled a small hobby shop), others much less so. And most of us know that an awful lot of the stuff is not going to get built or the materials used. That’s more obvious with a huge stash, where a program of building at a rate of a kit a week might require a decade or more at that rate to make a sizable dent in the total. But even a smaller stash may contain a fair amount of stuff that no longer fits your needs or interests.
I should say right away that I have no problem with kit collectors. I have known some, and was truly impressed with their encyclopedic knowledge of kit manufacturers and history. But sometimes you are surprised when you run into one. I once bought a couple of Authenticast slag car kits in a convention sales room, and when I let slip that I was looking forward to building them, the seller practically tried to grab them back from me. “Build them . . .” he said in dismay. I got out of there as fast as I could (by the way, they still aren’t built, as the smelter I once contemplated hasn’t materialized). But really, I’m sure I’m not a collector.
Here’s a photo of what these kits look like. 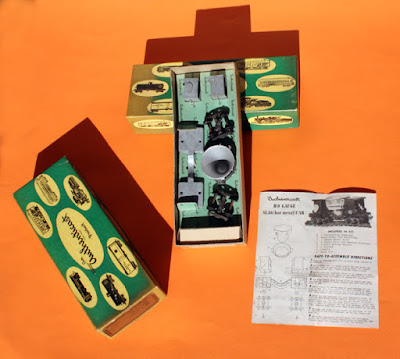 Gee, it still looks pretty interesting. Maybe I could stage one or two alongside my loading tracks at the Jupiter Pump & Compressor plant  — after all, they have a foundry — well, you see how it is that you hang onto stuff like this. (for JP&C, see: http://modelingthesp.blogspot.com/2015/09/jupiter-pump-and-compressor.html )
But when I say I’m not a collector, what I mean is that I really intend (at the time) to build or use the stuff I buy, though I will concede that some of my purchases have been with the thought that someday I might need that item. And we have all learned in our years in the hobby that if in doubt, buy it. It will likely cease to be available, either out of production or the kit maker out of business or something else. Buy it now or regret it later, the saying goes. I have certainly followed that injunction in some cases.
Naturally many of those purchases, made with the best of intentions, somehow slip out of contention for building or use, like my slag cars. And certainly freight car kits, of which I once had a truly serious stash, can pile up on you in the most unnerving fashion. The question is how you evaluate this. Maybe you are turning into a collector and haven’t realized it yet. A clue is when you really like owning “that kit” or “that brass engine” but have no interest in building or painting it, and certainly no interest in selling it. Nothing wrong with that, though I do advocate facing up to the reality that is right under your nose.
Or maybe you have just let things get out of hand. You know perfectly well that some of those kits were bought with objectives in mind that are no longer operative. I used to pick up structure kits all the time, when I lived in Pittsburgh and my layout had several sizable areas which were undefined, and thus could conceivably host any one of a number of structures. Now those areas are far distant in the rear-view mirror, and the kits, though still kind of nice, are clearly surplus. And there were plenty of freight car kits on my shelf which, when I looked at them objectively, really were not needed for my freight car fleet nor were sufficiently “fun” just to build. That makes ’em surplus.
I have written in earlier posts about the gradual change in my freight car fleet, with the disposal of older models as well as unneeded kits (for example: http://modelingthesp.blogspot.com/2014/12/a-right-size-freight-car-fleet.html ). The process continues. I never planned to replace the older models which were the best I could do at that time (remember when Athearn “Blue Box” box cars were the starting point for all 40-foot steel box cars?), but that’s what has been happening over the last two decades. I have now disposed of close to 350 cars, in the form of kits and of older, complete models, and have acquired or built about 275 new cars, in kit or ready-to-run form. The net effect has been to reduce my stash of car kits substantially. Resin in particular has been addressed very thoroughly, with more than 125 resin car kits either built or sold.
One good effect of car kits of various kinds passing through my hands is that in many cases I have made a Xerox copy of kit instructions to keep, as the information can be pretty valuable in itself, not only the prototype data but model-building techniques. I even like to look at the instructions for kits owned for a long time, as a reminder of what I once wanted to do, and that can refresh some of my present planning. So even keeping your stuff moving can leave you with something of value.
Practically every modeler has a stash of some kind, whether it’s structure or car kits like I discussed above, or brass engines that you “might need,” or materials like brick paper or basswood sheet or flat brass wire or . . . you recognize the pattern. This can be an asset when you need something out of that collection, but may need to be dealt with when it starts to overflow the storage space — or overflow what you are comfortable holding on to. It just needs to be evaluated from time to time.
Tony Thompson
Posted by Tony Thompson at 10:02 AM