I have written several times about the variety of commodities carried in tank cars, and the fact that certain commodities required special cars. Of course, many edible products and many simple chemicals can be carried in general-service tank cars, AAR class TM and ICC class 103, or even in non-regulated tank cars of classes like AAR-201 and AAR-203. But many corrosive, flammable, dangerous, or poisonous commodities have regulatory limits to how they are shipped, and must be carried in certain types of tank cars suitable for those cargoes.
A fairly complete table, occupying 14 book pages, was issued by American Car & Foundry, and was published as an Appendix to Edward S. Kaminski’s book, Tank Cars, American Car & Foundry, 1865 to 1955 (Signature Press, Berkeley, 2003). But of course not everyone has that book on their shelf, even though as a partner in the publisher, I think they surely ought to own the book <grin>.
A comparable table was published and distributed by General American Transportation Corporation, in several editions over the years. I have a copy of the one published in 1961. It is a most informative document, filled with operating directions, general arrangement drawings for complete cars, and also detail drawings of specific parts. Here is the cover (a little worn with use). 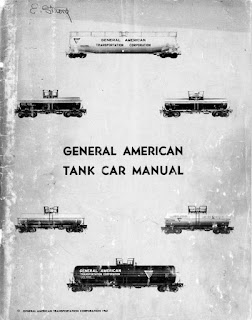 The Commodity table listing in this document is an alphabetical list of commodities identified by their chemical, trade or common name. The  Tank Car Specification(s) shown for each commodity show the tank car class most commonly used for that product, or in some cases the car class required to be used. Requirements are drawn from the ICC Regulations. Commodities not covered by those Regulations are called “non-regulated” commodities, and are indicated in the table by the symbol “N.R.”
The entire 12-page commodity table was scanned and made into a PDF, which I want to make available. I have put this PDF onto Google Drive, at this link:

Anyone can download the PDF for their use, or print it if desired.
In an upcoming column in the “Getting Real” column series in Model Railroad Hobbyist, I will be discussing tank car construction and details, as well as usage, and this commodity table will be one of the tools to identify cars with cargoes.
It’s my hope that this table will be use to modelers who wish to correctly marry their tank car models with appropriate waybills for suitable cargoes. That is the main way I use either one of the two tables (from AC&F or General American), and there are only a few differences in detail between the two.
Tony Thompson
Posted by Tony Thompson at 9:33 AM