Over the years, I have accumulated a few older models that continue to serve as “mainline” freight cars, that is, cars which normally do not get switched to or from my on-layout industries, but simply pass by in the mainline freight trains (this was discussed in the last paragraph of this post: http://modelingthesp.blogspot.com/2010/12/upgrading-old-models-3.html ). Some of these have older trucks I had never bothered to replace, and recently I got to looking at a few of them and decided they needed to be upgraded. If nothing else, this can be seen as a response in accord with my freight car standards (see for example: http://modelingthesp.blogspot.com/2011/03/model-freight-car-standards.html ), but also reflects problems like oversize flanges, out-of-tram truck behavior, or other operational issues.
As an example, I will use a Mantua reefer. Minimal upgrading had been done to it, retaining its molded-on grab irons and sill steps, but with a reasonable paint and lettering job, as well as weathering.  I have been working on some other “mainline” cars also needing new trucks, including some old tank car models and two Athearn metal house cars, but will just describe the Mantua example. 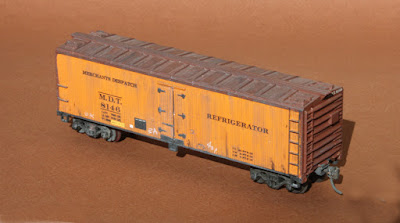 Shown above is the car body, prepared as described. Notice the route card, located right outside the black rectangle identified as the location for such cards. This card location is often seen in photos, no doubt deliberately done by car clerks who didn’t wish to be dictated to. The car is intended to represent the MDT cars with steel ends and wood-sheathed sides built in 1941.
The problem with the trucks can be seen in the view below. The Mantua truck is assembled as two cast metal sideframes, with a sheet steel bolster inserted into each sideframe. The sharp “cookie cutter” wheel flanges are an artifact of the 1950s. You can click to enlarge. 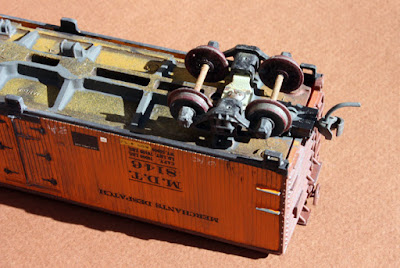 I first tried to disassemble the truck so the wheelsets could be replaced, but could not separate the parts. Also, I could see that the axle ends of the Mantua wheelsets are very narrow, so that the sideframes would not readily accept modern wheelsets. I decided to just replace the entire truck.
The original truck screws are very short and work only with the sheet-metal bolster shown above, so I simply tapped the hole deeper with a 2-56 tap, and chose new screws.
One can of course apply a generic AAR truck to cars like this. However, there are plentiful resources in existence to provide prototype information. In the case of MDT, the book Merchants Despatch, by Roger C. Hinman (Signature Press, 2011) is the relevant example, and I examined a number of photos in the book to choose a suitable truck for this model. I ended up using the Tahoe Model Works truck TMW-106, an ARA sideframe design with spring planks, produced by Buckeye.
For some of the tank car retrucking jobs, I used the ARA “Type Y” trucks which were common on tank cars, such as the Red Caboose or Bowser versions of this truck. I should also mention here the document which is an excellent resource on HO scale freight car trucks by Richard Hendrickson. It can be accessed on Google Drive at the following link:

The kind of job shown above on the Mantua reefer is almost trivial, except that it brings another car into conformance with standards, and also makes for better operation, when the oversize flanges of the Mantua wheelsets are replaced. In actuality, this kind of task goes on all the time with my fleet, and I only mention this instance here to use it as an example of the process.
Tony Thompson
Posted by Tony Thompson at 7:15 AM