Operations: more on car storage and use

Several years ago, I posted some comments to this blog about how I manage the flow and storage of the rolling stock on my layout (you can read it at this link: http://modelingthesp.blogspot.com/2011/12/operations-car-flow-and-car-storage.html ). I have a fair number of freight cars beyond what is needed to operate the layout, partly to create variety in operations, but certainly not least because I am a freight car enthusiast. I have always enjoyed researching and building new freight cars, and the result is a car fleet rather distinctly too large for the layout, even with extensive staging capacity.
One change I have made is to add some of the A-Line storage boxes. (These products are shown on their website, at: http://www.ppw-aline.com/hobbytote.htm ), though I have never bought the sleeve which makes them into a “tote;” I just buy the boxes.) These do a good job of holding about 16 cars each (for 40-foot cars), and they are well protected. Here is one such box, with the lid set aside.

I continue to use my paper-carton boxes with trays (as described in the post linked at the top of this post), though because these are less quickly accessible than the A-Line boxes, they have become a kind of “deep storage” option. Gradually the cars which are less frequently used are migrating into the paper-carton trays. Those cartons and trays were shown in the previous post, a link to which is at the top of this post.
The most active “pool” of cars is on the staging table, either made up into mainline trains, or simply in place on the storage tracks. This pool varies over time, with cars migrating off and onto the staging tracks as layout operations continue. Here is a shot of the table as it is at the moment. 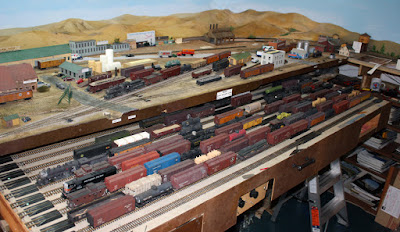 The table is not quite fully extended, as the furthest track visible is the 11th (there are 12 in all).
The other part of the active “pool” storage is the shelving in my adjoining room (the kitchen, when this space was a sub-size apartment). These cars supplement the cars on the staging table. The top and bottom shelves are not really curved, the lens focal length just makes them look that way. 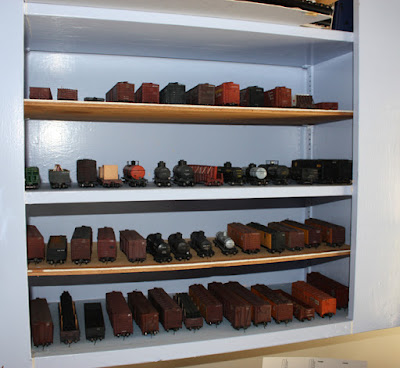 How is this managed? I have a chart laying out the sequence(s) of car movements at each industry or other car spot  (this procedure, a version of what can be called “demand-based car flow,” was described previously: http://modelingthesp.blogspot.com/2011/11/operations-demand-based-car-flow-2.html  ). From that chart, I make up a list of the movements which are the next sequence of operation, and go to my “pairs list,” described in an earlier post ( at: http://modelingthesp.blogspot.com/2012/02/waybills-17-pairs-list.html ), and thereby find the cars with waybills for each of those car spots, along with the overlay bills for each spot. The waybills are filed by industry, so are readily retrieved. Then the car itself is located in storage by a (searchable) roster of all cars in active service. One of the entries for each car is its location, in a paper carton, in an A-Line box, or in the pool. I summarized an earlier version of this process in a blog post a few months ago (see it at: http://modelingthesp.blogspot.com/2015/07/waybills-part-42-flexibility.html ).
Obviously the car roster is a critical part of this process, and I have learned that the roster has to be kept up to date as cars move around between various storage locations. I usually indicate such movements with pencil corrections on the most recent print-out. When a page gets too heavily marked up, I just update the electronic file and reprint the page.
All in all, the process described above does work, and seems to provide good operational movement of cars, while permitting some selection of cars for each movement (because there are multiple waybills for every industry and car spot). I am always experimenting with ways to make the process more efficient, but for now, what I’m describing works well.
Tony Thompson
Posted by Tony Thompson at 7:25 AM