I have alluded in prior posts in the “Waybills” series to the extremely valuable publications issued by many (maybe most) railroads, called a Shipper’s Guide, Industrial Directory, List of Industries, or some similar title. These documents list all on-line shippers and receivers, and are obviously superb resources. These are quite rare in the field of railroad paper items, in original form, and tend to be hard to find, even at railroad museums and archives, but luckily a number have been reprinted in recent years for modelers’ use. I am using reprinted Shipper Guides from Ted Schnepf’s “Rails Unlimited” business, for Great Northern, D&RGW, Union Pacific, Mopac / T&P, and Milwaukee Road. All these except the D&RGW one are available through Rails Unlimited (and here’s a link to their website: http://railsunlimited.ribbonrail.com/Books/shippers.html ; click on Books). There are several  posts  in which I have commented about these documents (for example, this one: http://modelingthesp.blogspot.com/2012/02/waybills-18-resources.html ).
At the Naperville Prototype Modelers meeting last month (see: http://modelingthesp.blogspot.com/2015/10/the-2015-naperville-meeting.html ), Ted had another new Guide reprint for sale, a 1971 List of Industries from the Rock Island. This nicely complements a thinner 1941 Rock Island Directory which Ted also sells (and which I have), so I purchased the 1971 version. Here is the cover: 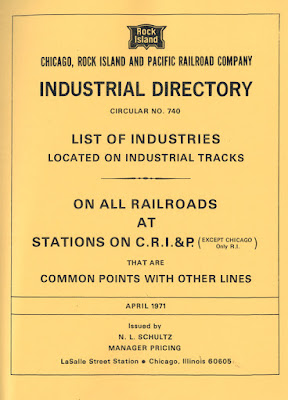 Inside are 258 pages packed with irreplaceable information about both shippers and consignees throughout the sprawling Rock Island system. I will just show a single page to illustrate the kind of information presented. You can click on the image to enlarge it. 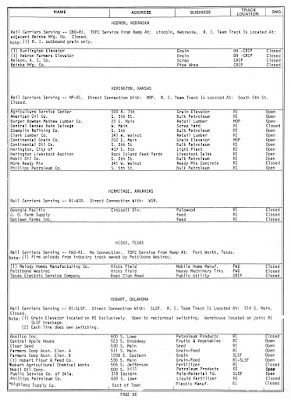 The information is self-explanatory except for the far-right column, headed “SWG” (for “switching”), which shows whether sidings are accessible by reciprocal switching arrangements (called “open”) or not (“closed”). The five towns listed, each in a different state, are evidently small and have only a few industries each. By contrast, cities like Houston, Kansas City, Denver, or Minneapolis require dozens of pages to list all industrial customers.
In fact, this 1971 Rock Island Directory is so comprehensive, it now joins my Great Northern Guide (also from Rails Unlimited) as my favorite useful and wide-ranging source of traffic information. 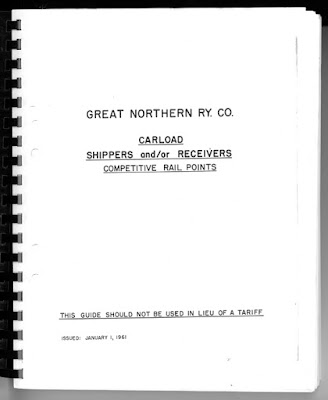 There is another source of this kind of information about shippers and consignees, namely the large list compiled by the OpSIG  group (Operations SIG of NMRA), which is available at their website, www.opsig.org, under “Online Resources,” and then “Industry Database.” This collected information is a fine effort by OpSIG and continues to grow, but be careful, as it is for a wide range of eras. Usually the date for each entry is shown, so it is possible to choose only the ones that fit your era. And though very extensive, it is in general less complete for a specific place than a Shipper Guide.
How would you use one of these Guides? I look both for shippers who might sell their product to a business on my layout, or a consignee who might receive shipments from an industry on my layout. To illustrate one such choice, the 1971 Rock Island Guide shows a wholesale grocer called Kaw Valley Produce Company in Topeka, Kansas, but the 1941 Guide does not show this company. Since I model 1953, can I ship produce to this company name or not? The obvious thing to do is to Google the company name and see what you can find. I’ll save you the trouble; you can go directly to: http://www.kansasmemory.org/item/216882 . A 1963 photo is shown there, and further checking shows the company was in existence at least as early as 1951. Accordingly, I can make up a waybill like this one: 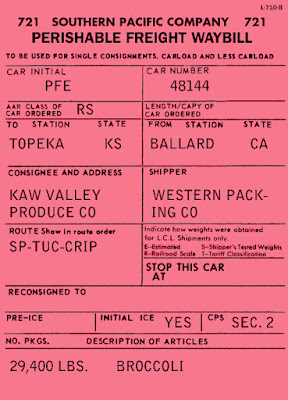 In place of the process just describe, one can of course “imagineer” company names for either consignees or shippers if desired, but I like to find authentic ones where possible, partly because the “real names” often sound particularly realistic, as in this case. I cannot praise enough the value of a Shipper Guide in assisting you in that process, should you wish to work in that direction.
Tony Thompson
Posted by Tony Thompson at 10:59 AM