Among the refrigerator car owners from which Pacific Fruit Express borrowed cars during the PFE peak harvest months was Fruit Growers Express. These borrowed reefers could be any available cars from the entire FGEX fleet, including associated fleets from the Burlington (BREX) and Great Northern (WFEX), fleets which were operated by Fruit Growers as fully part of the FGEX fleet. For this reason, I need to model some of these cars. I already have on my roster a steel BREX car and  wood-sheathed cars from WFEX and FGEX. But I could use one or two more.
A number of years ago, at a swap meet, I saw a fairly nicely assembled reefer from a Red Ball kit (or I believe that was the origin), for one of the Pennsylvania Railroad R7 refrigerators. It had been painted in a layout owner’s paint scheme of white sides with a horizontal blue frame stripe, but didn’t look too bad otherwise. The price was right, just one dollar as I recall, so I bought it.
I knew that when the PRR had joined Fruit Growers in the 1920s, the existing R7 cars had been transferred to FGE ownership. This car, as many know, was the refrigerator version of the X23 box car, with a complex pressed-steel exterior frame, built starting in 1913. This makes the exterior of the R7  visually striking, and I thought this would be an interesting addition to my FGEX fleet.
I should quickly interject that I know perfectly well this model falls far short of the beautiful Westerfield kit for these cars (kit 1160x, with the “x” being a number for three different roof versions available), and these are in stock as far as I know (you can check availability on their website, at http://www.westerfieldmodels.com/ ). But this is not a central part of my reefer fleet, so I’m willing to accept the compromises of this version. You may of course reach the opposite conclusion for your fleet.
It was easy to mask the boxcar red roof and ends and repaint the sides a golden yellow, as Fruit Growers used. Lettering was the next challenge. Although I am not aware of a decal sheet exactly for these R7 cars, the excellent Speedwitch Media set D119.1, for 1948-era paint, looked like it would work. These cars had been put into the FGEX number series 43500–46999, and even in the 1950s, some of these cars soldiered on in Fruit Growers service. Below is a prototype photo, taken in Sioux City, Iowa on September 30, 1952 (from the Bob’s Photo collection, used with permission). The car at left is notably taller. The R7 car height was not unusual in 1913, but cars gradually got taller and taller in the ensuing 50 years, up to my modeling year of 1953. 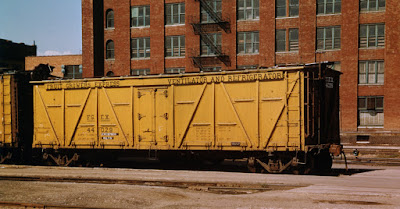 I chose a car number within the series noted above, and applied the decals, then weathered the model to suggest a car with lengthy service since it was last painted. In the photo below, notice how much shorter the car is, compared to the PFE steel reefer to its left, just like the photo above.

In service, these cars were limited by their small interior height and lack of floor racks, plus relatively thin insulation. They were accordingly used for dense cargoes like potatoes, or cargoes not requiring low transit temperatures, such as onions. I will waybill them accordingly on my layout, and am pleased to have one of these distinctive cars in my freight car fleet.
Tony Thompson
Posted by Tony Thompson at 12:09 PM