My latest column in MRH

The issue of MRH (Model Railroad Hobbyist) for January 2020 contains the most recent of my columns in the “Getting Real” series. It’s contained in what is now called “Running Extra,” an extra-fare component of the publication, costing about $1.66 an issue if you subscribe. As such, it’s no longer available free for on-line reading or download, but you can purchase an individual issue if you wish (go to: www.mrhmag.com ), at a price, I think, of $2.99.
This column is entitled “Graffiti,” and obviously it’s about modern freight cars and the graffiti they often carry. I emphasized throughout the article that yes, painting graffiti is a crime — vandalism — and I am not advocating crime. But in the real world, freight cars since the late 1970s have carried graffiti, like it or not, and as with weathering, reality demands that we confront the matter. My position is that I want freight cars to be realistic, which means both weathered and with graffiti (earlier this year, I posted a project along this line; it’s at: https://modelingthesp.blogspot.com/2019/07/weathering-freight-car-for-1999.html ).
I spent some time in the article on the history and terminology of this topic, and showed examples from both freight cars and walls of buildings. The reason was not merely to illustrate something everyone has already seen, but to choose some of the images to apply to model freight cars.
For those who may not have, or may not wish to have, access to the MRH article, I will summarize what I did. There are some very nice commercial decals out there, cited and used in the article, but I wanted to try a technique of using my own photographs for applying to models. Here’s one example from the article, the word “money,” obviously found on a brick wall, with ground below: 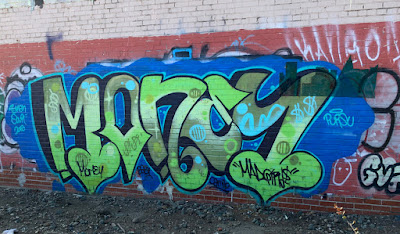 The photograph was not taken quite square to the original surface, so the image was squared up in Photoshop, then surrounding areas were removed from the digital images. The lines from the background brick are still visible in the digital image, but disappear when the image is reduced to HO scale. I used decal scissors to cut out the printed paper version.

A paper overlay like this was then thinned from the back with sandpaper until the edge essentially disappeared, then attached to the model freight car with canopy glue. I also added a Blair Line decal at the left of this overlay (below). After a coat of protective flat finish, the entire car was weathered, and a few scribbled “tags” added. Here is how it looked.

This was an interesting topic to research, an interesting and challenging topic on which to do field research, and an intriguing experiment to develop this kind of paper overlay technique for freight cars. I plan to do more cars like this for my friends who model late enough eras, and will report further in future posts.
Tony Thompson
Posted by Tony Thompson at 1:04 PM