I have built a few fences on my layout, largely board fences using the molded parts from Central Valley, suitably painted. These are good board fences, but I had always meant to add some fences in chain link at some point. This is a ubiquitous fence style and dates back to the 19th century in America. But in a previous trial, I had experimented with a kit (the maker of which shall remain nameless) using wedding-dress tulle, and had not liked it very well.
So when I saw the etched metal fencing material marketed by Bernie Kempinski’s company, Alkem Scale Models, I was really thrilled. I bought a set of the material directly from Bernie (he often has a few sets with him, if you see him at a convention or operating weekend), but you can buy it on line also (here is a link to the fence page on his site, and elsewhere on the site there is a PDF instruction sheet, if you want to see how to use the material: http://alkemscalemodels.biz/chain-link-fence ).
Shown below is the etched fret that comes in one of the kits, with a couple of pieces cut out that I was planning to install. I had measured the length of the desired site and it would need eight of the fence panels, thus the cutting shown here. At the top of the fret is material for gates. Each fence panel has a representation of barbed wire along the top, but of course this can be cut off if not needed for the fence you are building. 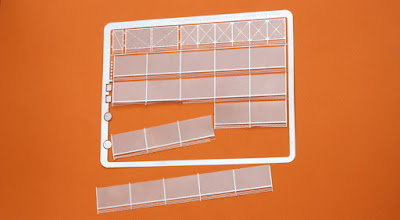 The material is stainless steel and is readily cut with strong shears or side cutters.
For the first section I wanted to install, totaling eight panels as just mentioned, I needed to join the five-panel and three-panel pieces shown above. I used CA to do this. I taped down the fence segments on top of a strip of waxed paper, aligning the segments with a straightedge. I then carefully applied CA with a pin, then did the same to attach posts, using the fence post material supplied in the kit, 0.032-inch wire. Here is the completed 8-panel segment. You can readily see the three posts.

The fence itself is the silvery color of natural stainless steel, unlike any real chain link installation, even a brand-new one, because the galvanized material, though somewhat silvery, has much more gray to it. And of course it oxidizes in service to even more of a gray. I spray painted the fence with Tamiya “Light Ghost Gray,” their item AS-26, but probably any light gray would be fine.
It was ready to install once I marked the location of the posts, and used an awl to make holes to set the posts. I put a small blob of canopy glue on the bottom of each of the posts, and gently inserted them into the prepared holes. A couple of wood blocks were used to prop up the fencing in a vertical position until the glue could set. Here’s a view of it in place, between my California Division of Highways garage (at left) and Pacific Chemical Repackaging. 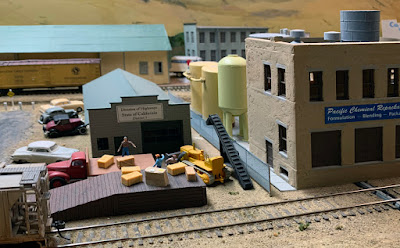 For more of a close-up, which I think demonstrates better how nice this fencing looks, this view is of the same area. 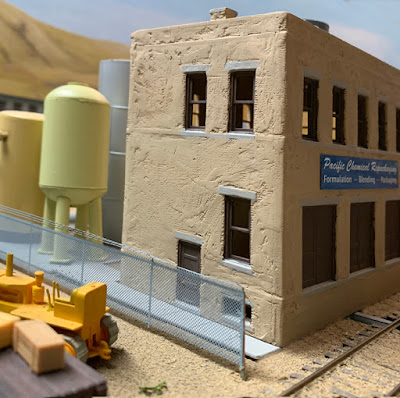 (I remember mentioning chain-link fences to a fellow modeler, who remarked, “Isn’t that pretty modern?” This kind of wire fence was actually invented in 1844 in England, and the first American company to produce and market this fencing was the Anchor Post Fence Company in 1891. When I was a boy in Southern California, the most numerous installations were from Cyclone, and accordingly this was almost always called “cyclone fence,” not chain-link. At that time, Cyclone Fence was part of American Steel & Wire, a division of United States Steel, and it both manufactured and installed chain-link fences.)
I was glad to get this length of fence installed, and will probably continue with a perimeter fence for this industry, Pacific Chemical Repackaging, using more of the Alkem Scale Models fencing.
Tony Thompson
Posted by Tony Thompson at 5:21 AM