Thanks again to Brian Moore

Last fall, as part of a trip to Portugal taken by my wife and me, we took some time in England and visited Brian Moore in Plymouth, partly to see that end of the country but especially to see his superb layout. Brian is modeling the area around Guadalupe, California, in the southern part of Southern Pacific’s Coast Division (which I also model), and it was a delight to see what he has accomplished so far (my post about the visit and the layout is here: https://modelingthesp.blogspot.com/2019/10/visiting-brian-moore.html ).
As it turns out, Brian had noticed one of my blog posts, about converting prototype produce box labels for HO scale use, and in particular “adjusting” the locations of the packing houses. The first in a series of what was eventually 7 posts is at this link: https://modelingthesp.blogspot.com/2017/08/produce-shipping-boxes-in-ho-scale.html ). [You can find all the others by using the search term “produce shipping boxes” in the search box, at right and slightly above.]
I had  begun with this actual label, for a brand of lemons packed in Carpinteria, California, a seaside community. It happens to be a brand used by that packing house for the “second-tier” Sunkist-classified fruit, thus the Red Ball emblem on the label. (Note the comment at lower left: “grown by the sea.”) 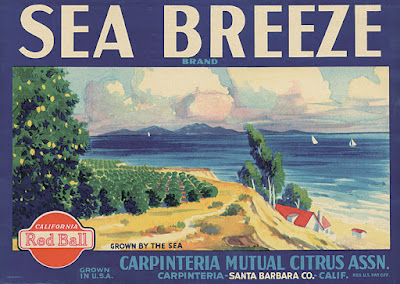 I wanted to use this label for my layout’s packing house, the Coastal Citrus Association, at the mythical town of Santa Rosalia, and to make it into a “premium” Sunkist label by replacing the Red Ball emblem with a tissue-wrapped fruit image. Those kinds of “adjustments” are quite easy in Photoshop, and I proceeded to do so, using the original lettering rearranged, and producing this label: 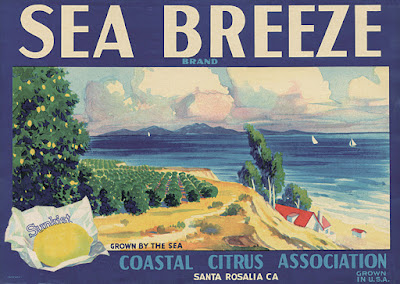 This is the label Brian had noticed and decided to memorialize. He actually had coffee cups made with several of my “adjusted” labels, including this one, and he gave me one when I was standing at his layout! I was delighted to bring it home, and here it is, next to the packing house for which it’s named: 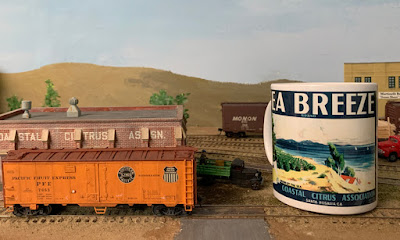 One or two of the other cup variations Brian made can be seen in some of his nice videos of SP model trains. (You can readily find some of Brian’s videos on YouTube.)
As I said previously, it was really a lot of fun to meet Brian and his wife Jane, enjoy their guiding us around Plymouth (they were great hosts), and especially to see and operate his excellent layout. I know he has a lot more he wants to do on the layout, and I very much look forward to seeing progress as it emerges. Thanks again, Brian.
Tony Thompson
Posted by Tony Thompson at 10:34 AM